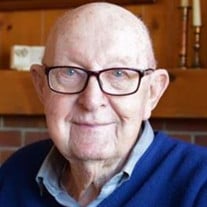 LaVern W. Scheidies, 94 years of age of Minden passed away Sunday June 14, 2020 at CHI Health - Good Samaritan Hospital in Kearney after a brief illness. The son of Albert and Fern (Woodward) Scheidies, LaVern was born November 24, 1925 on their farm in Kearney County. His family later moved to Juniata where he graduated from high school in 1943. While still in high school, LaVern enlisted in the Air Force Cadet program, and he eventually served in World War II as a tail gunner on a B-17 with the 326th Army Air Force unit, flying eight combat missions over occupied territory in Europe. After being discharged in January 1946, he attended Hastings College for two years before going to work the family farm. LaVern met his beloved wife Roberta “Bert” Meyer at a dance in Grand Island. They married October 12, 1951 and had five children – Keith, Mark, Randy, Rhonda and Tim. In 1963 they moved to the Scheidies family farm near Lowell, living there until moving to Minden at retirement in February 1996. LaVern moved to Bethany Home in Minden in October 2018, where he lived until his passing. LaVern was a farmer and agricultural entrepreneur, with side businesses selling seed corn, sweet corn and popcorn, custom hay baling, and clerking farm and household auctions for many years. He was active in the St. Paul Lutheran churches, both in Lowell while on the farm, and after moving into Minden. He was known to many by his longtime nickname “Jiggs”. LaVern was preceded in death by his parents and brother Robert; wife Roberta, son Mark and granddaughter Nichole. He is survived by many who loved him, including his children Keith (Carolyn), daughter-in-law Jennifer, Randy (Nancy), Rhonda McCarthy, and Tim (Lisa); grandchildren Chris, Cassie, Tiffany, Crystal, Nick, Whitney, Anne, and Sara; great grandchildren Devon, Dane, Tori, Colton, Mason, Paxton, Josh, Aniah, Ellery and Zeke; and other relatives, friends and neighbors over the years. Funeral services will be held at 10:00 a.m. on Thursday, June 18, 2020 at the St. Paul Lutheran Church in Minden with the Rev. Christopher Hazzard officiating. Services will include special remembrance for his son, Mark. Burial will be held following services at the Minden Cemetery with military honors presented by the Minden American Legion and Heartwell Veterans of Foreign Wars. Visitation will be held from 2:00 to 6:00 p.m. on Wednesday, June 17, 2020 at Craig Funeral Home in Minden. Current CDC recommendations for faith based services will be followed. Services will be streamed to the church and funeral home’s social media platforms. Memorials are suggested to St. Paul Lutheran Church or Bethany Home in Minden; alternately any donation to a charity or a random act of kindness of your choice is a great way to honor LaVern’s memory, as he was very charitably inclined. Craig Funeral Home is in charge of arrangements. Tributes and memories can be shared with the family at www.craigfunerals.com.

The family of LaVern W. Scheidies created this Life Tributes page to make it easy to share your memories.

Send flowers to the Scheidies family.