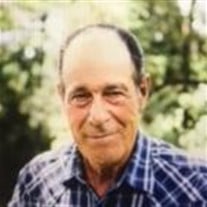 LaVerne Richard Boudreau, 73 years of age, passed away on Saturday, September 2, 2017, at the University of Nebraska Medical Center in Omaha. LaVerne was born on October 27, 1943 near Upland, Nebraska to Uklid and Leona (Champoux) Boudreau. He grew up on a small farm in the Upland area working hard and growing up on the land. LaVerne was a 1962 Upland High School graduate. He married Donna Marie Morin on May 22, 1965. They raised their four sons on the family farm. LaVerne was quiet and good natured, gentle, and caring. His life was the land and the nature within it. It was within him, his very essence, and included the land that he farmed, the cows he tended, and the cats that followed him everywhere. His hands were a testament of his hard work. LaVerne also enjoyed his children’s and grandchildren’s activities. His favorites included school activities, county fairs, fishing holes, and eating desserts with his family. He was a member of St. Anne’s Catholic Church in Campbell and was third degree in the Knights of Columbus. He served his country in the National Guard. Survivors include his wife, Donna of Upland; children, Michael Boudreau and wife Jodi (Lundeen) of Minden, Mark Boudreau and wife Signe (Swanson) of Lincoln, Scott Boudreau and wife Mindy (Points) of Minden, and Eric Boudreau and wife Brandy (Parr) of Upland; nine grandchildren, Alaina, Jenae, Leah, Brayden, Barret, Alex, Kate, Brielle, and Blake Boudreau; sister-in-law and brother-in-law Richard and Patricia Morin of Lincoln. He is preceded in death by his parents, father-in-law and mother-in-law Eugene and Cecilia Morin, and infant nephew. The rosary will be at St. Anne’s Catholic Church in Campbell, Nebraska at 7:30 p.m. on Wednesday, September 6, 2017. Visitation will be at the church. Funeral services will be Thursday, September 7, 2017 at 10:30 a.m. at St. Anne’s with graveside services at St. Anne Cemetery. Craig Funeral Home in Minden is in charge of arrangements.

LaVerne Richard Boudreau, 73 years of age, passed away on Saturday, September 2, 2017, at the University of Nebraska Medical Center in Omaha. LaVerne was born on October 27, 1943 near Upland, Nebraska to Uklid and Leona (Champoux) Boudreau.... View Obituary & Service Information

The family of LaVerne Richard Boudreau created this Life Tributes page to make it easy to share your memories.

LaVerne Richard Boudreau, 73 years of age, passed away on Saturday,...

Send flowers to the Boudreau family.