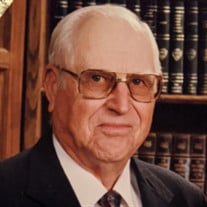 LaVerne Fredrick Reil, 94, of Hildreth passed away on Thursday, October 29, 2020, at the Central Nebraska Veterans Home in Kearney. A private family service will be held at Trinity Lutheran Church in Hildreth with Pastor Caroline Keenan officiating. Interment with military honors will be held at the Hildreth Cemetery. Public visitation will be held from 4:00 to 6:00 p.m. on Friday, November 6, 2020 at the Craig Funeral Home – Jelden Chapel in Hildreth. Memorials are kindly suggested to Trinity Lutheran Church in Hildreth, the Hildreth Volunteer Fire Department, the Hildreth American Legion and VFW. Craig Funeral Home in Hildreth is in charge of the arrangements. LaVerne was born on May 22, 1926 in Hildreth to Onno and Tena (Fruhling) Reil. He grew up in the Hildreth area. He attended Lakeview country school, District #35 and graduated from Hildreth High School, the class of 1943. He entered the Army where he faithfully served from February 15, 1951 to November 18, 1952. He was united in marriage to Shirley (Loschen) Bunger Reil on September 1, 1973 in Hildreth and to this union, one child was born: Corey LaVerne Reil; in addition, four of Shirley’s children whom he loved as his own. The family continues to make their home in Hildreth. He farmed on the family farm southwest of Hildreth. He was baptized and confirmed at St. Peter’s Lutheran Church. Following his marriage, he became a member of St. Paul and later Trinity Lutheran Church. As a member of the church, he served as Board Treasurer and in addition served as Treasurer for the CROP walk. He was a member of the Kearney Elks and Eagles Club, the Hildreth Lions Club, American Legion Post #0378, the Co-op Board and life Member of the VFW where he participated in the firing squad. He served as President and Vice President of the Golden Years Center and delivered meals for them. He enjoyed bowling for the Hildreth John Deere League in Minden. He delighted in solving crossword puzzles and putting together jigsaw puzzles. He loved music and was often singing or whistling along at home and in church. He also enjoyed playing the guitar at home with his family. He was blessed with very well-timed dry humor and an engaging smile that made a lasting impression everywhere he went. He and his wife Shirley had great times going out dancing with their friends. He liked to watch baseball and Husker football games. In addition, he loved to play cards and have coffee with “the guys”. Those left to cherish his memory include his wife, Shirley Reil of Hildreth; children, Teresa (Galyn) Lind of Elm Creek, Brenda (Scott) Losey of Republican City, Scott (Nancy) Bunger of Axtell, Regina (Larry) Hanson of North Platte, Corey (Peggy) Reil of Platte City, Missouri; grandchildren, Jennifer, Stacy, Cari, Ashley, Becca, Rachel, Amanda, Nicole, Andrew, Joanna, Chelsey, Katrina, Taylor, Ryan, Melissa, Matt, Jill, Stacey, Sam, Dan, and Susan; 28 great-grandchildren; as well as a host of extended relatives and friends. He was preceded in death by his parents, Onno and Tena Reil; and sister, Adelene Card. Tributes and memories can be shared with the family at www.craigfunerals.com.

LaVerne Fredrick Reil, 94, of Hildreth passed away on Thursday, October 29, 2020, at the Central Nebraska Veterans Home in Kearney. A private family service will be held at Trinity Lutheran Church in Hildreth with Pastor Caroline Keenan... View Obituary & Service Information

The family of LaVerne F. Reil created this Life Tributes page to make it easy to share your memories.

LaVerne Fredrick Reil, 94, of Hildreth passed away on Thursday,...

Send flowers to the Reil family.