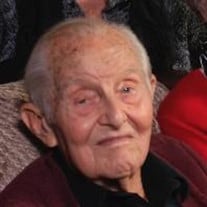 Lawrence Alvin Osterbuhr, 96 years of age passed away on January 27, 2017 at the Kearney County Health System-Hospital in Minden. Funeral services will be on Wednesday, February 1, 2017 at 2:00 p.m. at the Trinity Lutheran Church in Hildreth with Reverends Patti and Steve Byrne officiating. Burial will be in the Emmanuel Lutheran Cemetery south of Hildreth with military honors. Visitation will be at the Jelden-Craig Funeral Chapel in Hildreth on Tuesday from 4-6 p.m. Lawrence was born March 30, 1920 on a farm south of Hildreth, Nebraska. His parents were Ehme J and Tena (Albers) Osterbuhr. He was baptized and confirmed at Emmanuel Lutheran Church south of Hildreth. He attended school at District 21 just ½ mile from his home. After completing eighth grade he stayed at home to help with the farm work. In September 1941, he enlisted in the US Coast Guard and took his basic training in Port Townsend, Washington. He then sailed to Honolulu, Hawaii in October 1941 and was aboard the USCG Kukui at the time of the Pearl Harbor attack on December 7th. On April 7, 1945, he was united in marriage to Alta (Connie) Conrad at Emmanuel Lutheran Church in Perryville, Missouri. When World War II ended, Lawrence and Connie started farming on the family farm in 1946. To this union they added two daughters. They were members of Trinity Lutheran Church of Hildreth. His activities included Church Council and cemetery Board, Hildreth School Board, Elevator Board, Pearl Harbor Survivors Association and Lions Club. He also contributed hours of volunteer work at Franklin County Historical Museum. Survivors include one daughter, Sandi Einspahr of Hildreth and one brother, Earl Osterbuhr of Franklin. Grandchildren are Dawn Stubben and husband, Todd of Creighton NE, Amy Dallman and husband, Brad of Franklin NE, Dodi Craft and husband, David of Oceanside, CA, Del Einspahr and wife, Angie of Elkhorn NE, Tina tenBensel and husband, Troy of Arapahoe NE, and Kara DeJonge-Adcock and husband,Shane of Lincoln, NE; Sixteen great grandchildren and 6 great-great grandchildren. He was preceded in death by his beloved wife, Connie, one daughter, Patti DeJonge, and one sister, Esther Hemmen. Lighthouses don’t ring bills and fire guns to call attention to their light . . . . . . . . They just shine.

Lawrence Alvin Osterbuhr, 96 years of age passed away on January 27, 2017 at the Kearney County Health System-Hospital in Minden. Funeral services will be on Wednesday, February 1, 2017 at 2:00 p.m. at the Trinity Lutheran Church in Hildreth... View Obituary & Service Information

The family of Lawrence A. Osterbuhr created this Life Tributes page to make it easy to share your memories.

Lawrence Alvin Osterbuhr, 96 years of age passed away on January...