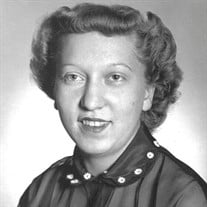 Lela E. Panter, 85, of Hildreth passed away on Thursday May 7, 2020 at Phelps Memorial Health Center in Holdrege. Due to current circumstances, a Celebration of Life memorial will be held at later date with interment in Athol, KS. Memorials in Lela’s honor are kindly suggested to the family for later designation. The family requests words of condolences through the funeral home website at www.craigfunerals.com. Cards can be sent to the family at Craig Funeral Home 336 N. Nebraska Ave, Minden NE 68959. Lela Esther Panter was born July 17, 1934 in Athol, KS to Henry and Minnie (Kirchkoff) Gerstenkorn. She was baptized and confirmed at St. John’s Lutheran Church in Athol, KS. She spent all of her youth in that community. She attended Athol High School and graduated in 1952. On January 29th 1956 she married Duane (Pete) Panter. To this union brought four children. She worked most of her adult life. After high school she worked at the local telephone company. She then worked as a bookkeeper at Athol Coop. In the mid 1960’s, the family moved to Hildreth Nebraska, she worked at Wilcox Public School as secretary and the Hildreth Golden Years Center. After she moved to Colby, KS, she spent nearly 20 years at Colby Community College, as a residence director on campus. She enjoyed her years there and touched the lives of many students and faculty. After retiring, she moved back to Hildreth and lived her years enjoying friends and family. She was known as a servant of God with strong faith. To her children, grandchildren and great grandchildren she was generous and loved to spoil them often. She was truly the center of her family and was always there to offer her advice and guidance. Her older grandchildren will remember all the times spent at Grandma’s place in Colby to be able to shop for toys, the snack table, swimming at any time and the endless quarters for the vending machines. Her house in Hildreth was the place to be for holidays. She enjoyed socializing with friends and family, playing games of all kinds, playing piano, being a proficient knitter and keeping up with local and national news. She was knitting up until the day of her death and her items she has knitted will be greatly treasured by family. Her memory carries on by her children, Jacquie (Joe) Slagle of Kearney, NE, Joel (Denise) Panter of Holdrege, NE, Mileah Panter of Kearney, NE. Grandchildren include Cecilee (Blake) Huelsnitz of Grand Island, NE, Ashlee Clark of Omaha, NE, Connor Slagle of Kearney, NE, Cole Slagle of Kearney, NE, Adam (Jenae) Svoboda of St. Paul, NE, Aaron (Vanessa) Svoboda of Omaha, NE, Zach Svoboda of Omaha, NE, Gabrielle (Michael) Renderos of Overton, NE, Emme Nickel, Mia Nickel and Cadie Nickel all of Kearney, NE. Great grandchildren include Broderick Huelsnitz, Olivia and Jade Svoboda, Lennyn Svoboda and her closest niece Deb Murrish of St. Louis; as well as many other family and friends. She was preceded in death by her parents and siblings, her son Steve Panter and granddaughter Moriah Panter.

Lela E. Panter, 85, of Hildreth passed away on Thursday May 7, 2020 at Phelps Memorial Health Center in Holdrege. Due to current circumstances, a Celebration of Life memorial will be held at later date with interment in Athol, KS. Memorials... View Obituary & Service Information

The family of Lela E. Panter created this Life Tributes page to make it easy to share your memories.

Send flowers to the Panter family.