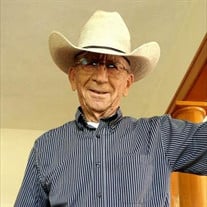 Leland “Lele” Jelden, 80 years of age from Hildreth passed away on Saturday, February 4, 2017 at Kearney Regional in Kearney. Funeral services will be on Wednesday, February 8, 2017 at 11:00 a.m. at the Trinity Lutheran Church in Hildreth with Reverends Patti and Steve Byrne officiating. Burial will be in the Hildreth Cemetery. Visitation will be on Tuesday from 4-6 p.m. at the Jelden-Craig Funeral Chapel in Hildreth. Memorials are suggested to the Trinity Lutheran Church in Hildreth or the American Cancer Society. Lele was born on February 18, 1936 in Hildreth, NE to Jelde Remmers and Minnie (Quadhamer) Jelden. He was baptized and confirmed at the St. Peter’s Lutheran Church in Hildreth. He graduated from Hildreth High School. On October 22, 1961 he married Marge Siebke at the Zion Lutheran Church in Kearney, Nebraska. They lived and farmed near Hildreth and were blessed with three children, Julie, Lance and Trish. Lele served in the U.S. Air Guard from 1953 until 1959. He was active in the Hildreth Community. Lele was a member of the Trinity Lutheran Church, having served on the church council, sang in the church choir and taught Sunday school. He was a past member of the Hildreth Lions Club, was the Hildreth Football announcer for many years and was a scout leader. He loved to fish and hunt. He loved spending time with his grandchildren and attending their sporting events. Most of all he was proud and supportive of his wife and children. His family was so important to him. Survivors include his wife, Marge of Hildreth; two daughters, Julie Burrell and husband, Monte of Wauneta, NE and Trish Strobel and husband, Shane of Clarks, NE; son, Lance Jelden and wife, Connie of Hildreth; seven grandchildren, Cade Burrell, Carson Burrell and wife, Bethany, Tanner Fate, Marshall Jelden, Tyson Fate, Megan Jelden and Sydney Strobel. He is preceded in death by son in-law, Gregg Fate, two brothers, Wayne Jelden and Robert Jelden and sister, Helen Mae Jelden.

The family of Leland "Lele" Jelden created this Life Tributes page to make it easy to share your memories.

Leland “Lele” Jelden, 80 years of age from Hildreth passed away...

Send flowers to the Jelden family.