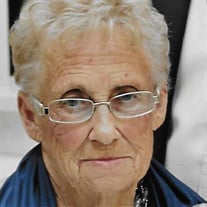 Leona M. Graham, 82 years of age from Minden, NE passed away on Tuesday, April 18, 2017 at the Bethany Home in Minden. Funeral services will be on Monday, April 24, 2017 at 10:30 a.m. at the St. John’s Catholic Church in Minden with Father James Benton officiating. Burial will be at a later date. Visitation will be at the Craig Funeral Home on Sunday from 3-5 p.m. Rosary will be recited Sunday evening at 7:00 p.m. at the church. Leona was born on February 17, 1935 in Grand Island, NE to Frank and Emma (Skibinski) Mueller. She attended St. Mary’s Cathedral High School and graduated in 1954. On September 7, 1955 she married Richard Graham; they lived in North Carolina and California while Dick served in the United States Marine Corp. They moved back to Nebraska in 1961. Leona worked at Mosaic in Axtell for 34 years before retiring. She was a member of the St. John’s Catholic Church in Minden. Survivors include her 5 children, Terri (Ron) Sutton of Kearney, Richard of Minden, Duane (Karla) of Brush, CO, Diane (John) Polen of Holdrege and Joe (Shannon) of Hastings; 6 grandchildren; and 10 great grandchildren. She is preceded in death by her husband, Richard, her parents, 2 brothers, Ed Mueller and Raymond Mueller; 4 sisters-in-law, Erma Mueller, Ruth Brown, Mary Lou Mudler, and Jean Zlomke; brother-in-law Harold Brown and step brother, Martin Graham.

The family of Leona M. Graham created this Life Tributes page to make it easy to share your memories.

Send flowers to the Graham family.