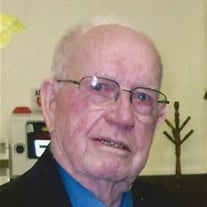 Leonard Axel Anderson, 91 years of age from Minden, NE passed away June 8, 2016 at the Bethany Home in Minden. Memorial services will be on Saturday, June 11, 2016 at 10:30 a.m. at the Bethany Lutheran Church south of Axtell, NE with Rev. David Evenson officiating. Burial will be in the Minden Cemetery with Military rites provided by the Minden American Legion and the Heartwell VFW. No Visitation. Craig Funeral Home in Minden is in charge of arrangements. Leonard was born May 10, 1925 to Charles M. and Jennie V. (Larson) Johnson in Fort Collins, Colorado. A few months later his father, who was an Army Veterinarian, was kicked by a horse and died at Fitzsimmons Army Hospital in Denver on March 28, 1926. Leonard and his mother returned to Sweden in 1927, and when he was 2 years old they came back to America where his mother married Joseph A. Anderson on May 23, 1928 at Minden, Nebraska. He was a lifetime member of Bethany Lutheran Church near Axtell, Nebraska. He lived with his parents on their farm southwest of Minden and attended District 48 Country School through 8th grade. After graduating from Minden High School in 1944 he joined the Army on September 25, 1944 where he served with the 77th Division, the 307th Infantry Regiment. He was sent with the 77th to Okinawa and later to Japan during WWII. He was honorably discharged on November 27, 1946. After his military service he returned to Minden where he met and married Irene V. Robb on August 14, 1949. Two children were born to this union: Wayne Joe and Brenda Lee. He married Roma Lee (Space) Kile who had four children: Steve, Rick, Scott and Shellie. He worked at the Hastings Ammunition Depot, Colorado Air National Guard, farmed for several years, was an over the road trucker and finally worked for Central Nebraska Public Power and Irrigation District where he retired on September 9, 1990. Leonard enjoyed serving others and was an active member of several organizations: American Legion Post 94 of Minden where he served as a faithful member of their Color Guard for 35 years, 40 and 8, Veterans of Foreign Wars, Independent Order of Odd Fellows, The Elks, Danish Brotherhood, and The Eagles. He was a Veterans Affairs Voluntary Service member and a representative for the V.A. Medical Center in Grand Island for years. He enjoyed metal and wood working as a hobby. Leonard was devoted to his family. He and Roma enjoyed dancing and traveling both within the United States and overseas. He is deeply missed by his wife Roma Lee of Minden, son Wayne Anderson and wife Sandi of Chadron, daughter Brenda Anderson of Wichita, Kansas, his grandson Michael Anderson and wife Michelle of Golden, CO, his granddaughter Anita Robben and husband Steve and great grandson Gage Robben of Wichita, Ks., his step children, Steven Kile and wife Sharon of Minden, Rick Kile and wife Marilyn of Kearney, Scott Kile and wife Nancy of Glen, and Shellie Stec and husband P.J. of Minden. He is also survived by nine step grandchildren and eight step great grandchildren. Leonard was preceded in death by his father Charles M. Johnson, parents Joseph and Jennie Anderson, grandson Eric Robben and brother Lloyd Anderson.

Leonard Axel Anderson, 91 years of age from Minden, NE passed away June 8, 2016 at the Bethany Home in Minden. Memorial services will be on Saturday, June 11, 2016 at 10:30 a.m. at the Bethany Lutheran Church south of Axtell, NE with Rev. David... View Obituary & Service Information

The family of Leonard Axel Anderson created this Life Tributes page to make it easy to share your memories.

Send flowers to the Anderson family.