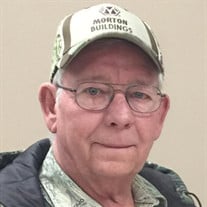 LeRoy Elray Finnigsmier, 68, of Heartwell, passed away on Monday, August 5, 2019 at Bethany Home in Minden after years of battling chronic illness. He was surrounded by many who cared for him. Memorial services will be held at 11:00 a.m. on Friday, August 9, 2019 at the St. Paul Lutheran Church in Minden with the Rev. Christopher Hazzard officiating. Private family interment with military honors will be held prior to services at the Eaton Cemetery near Heartwell. Visitation will be held from 3:30 p.m. to 5:30 p.m. on Thursday, August 8, 2019 at the Craig Funeral Home in Minden. Memorials in LeRoy’s honor are kindly suggested to the Heartwell VFW Post 5537 or to the Heartwell Lions Club. Craig Funeral Home is in charge of the arrangements. LeRoy was born on January 17, 1951 in Kearney, NE to Harley and Irene (Carter) Finnigsmier. He attended schools in Minden until the tenth grade. He then attended school in Kearney and graduated from Kearney High School with the class of 1969. LeRoy was drafted to serve his country in the United States Army during the Vietnam War and did so honorably from May 13, 1970 to January 11, 1972. LeRoy then met Marta Brehm, they married and were blessed with three daughters, Mandi, Jami, and Nicci. The couple later divorced. The family made their home in Heartwell. LeRoy worked for local farmers and Cargill in Heartwell until retiring after 25 years. He was an active member of the Heartwell VFW and Heartwell Lions Club. LeRoy loved collecting McDonald’s toys, fishing, restoring his 1958 Chevrolet Apache truck and being his own carpenter. Those left to cherish his memory include his daughters, Mandi (Shawn) Lupkes of Minden, Jami (Bill) Maendele of Kearney, and Nicci (Paul) Young of Lexington, MO; grandchildren, Gage Lupkes, Gavin Lupkes, Serina Maendele, Hailey Maendele, Aniston Maendele, Grant Young, and Kasey Young; step-grandchild, Tyson Brown; sister, Barb Holland of Tulsa, OK; step-siblings, June Espenhover, Lee Huddleston, and Dale Huddleston; as well as a host of nieces, nephews, other relatives and friends. He was preceded in death by his parents, brother, Duane, and step-mother, Nellie. Tributes of memory can be shared with the family at www.craigfunerals.com.

LeRoy Elray Finnigsmier, 68, of Heartwell, passed away on Monday, August 5, 2019 at Bethany Home in Minden after years of battling chronic illness. He was surrounded by many who cared for him. Memorial services will be held at 11:00 a.m.... View Obituary & Service Information

The family of LeRoy E. Finnigsmier created this Life Tributes page to make it easy to share your memories.

Send flowers to the Finnigsmier family.