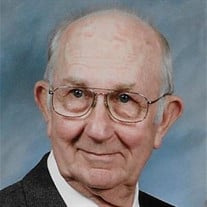 Lester Lee Burnham, 89 years of age from Minden, Nebraska passed away on Thursday, July 6, 2017 at Bethany Home in Minden. Funeral services will be on Tuesday, July 11, 2017 at 11:00 a.m. at the United Methodist Church in Minden with Rev. Paul Blanchard officiating. Visitation will be at the Craig Funeral Home in Minden on Monday from 3-5 p.m. Burial will be in the Minden Cemetery. Lester was born March 19, 1928. He was born at home 4 miles east of Kearney to Rex and Lilie (Gehrt) Burnham. Lester started school in 1933 at the Snyder country school northeast of Kearney. He attended Battle Creek High School until ninth grade where his grandmother, Cora Burnham, lived. He graduated from Kearney High School in 1945. Lester entered the U.S. Navy in 1945. He served overseas in Guam. Lester received an honorable discharge in June of 1947 as an electrician mate third class. He served in the Naval reserves until 1952. He farmed with his father one year. Then he entered Kearney State College for three semesters and transferred to the University of Nebraska. He graduated in 1952 with a B.A. in Agriculture. He married Phyllis Erickson of Holdrege at Bethel Lutheran Church in Holdrege on July 5, 1952. In 1952, he became assistant County Extension Agent in Custer County for one year. Lester was appointed County Extension Agent of Kearney County in June of 1953. He served in this capacity until December of 1986. He wrote that he worked with United States’ finest people and youth here as Kearney County Extension Agent. In retirement he served as a crop hail adjuster, crop scout for Dekalb Hybrid Seed and as a craftsman at Pioneer Village. Earlier he served as President of Minden Rotary Club and as secretary-treasurer and president of the Nebraska County Agents Association. He was the recipient of the distinguished County Agents service award in November 1980. Les received many appreciation awards from Kearney County and the state. He served on the Bethany Home board and the Foundation Board. He was a board member of the South Central 4-H Center. He was a member of the Minden United Methodist Church. Survivors include his wife, Phyllis of Minden, son, John Burnham of Hastings, daughter, Paula Beierman and husband, Tim of Albion; three grandchildren, Ryan, Tyler and Ashtyn Beierman; brother-in-laws Richard Erickson of Holdrege, Roger Erickson of Lincoln; nephews Wade (Audra) Erickson of Colorado Springs, Richard Krotz of Lincoln; niece Ann Krotz of Malcolm; cousins Dick and Della Gehrt of Elm Creek and Donna McCollister of Salem, Oregon. He was preceded in death by his parents and one sister, Iona Krotz and her husband Doyle; nephew David Krotz; in-laws Ralph and Vera Erickson; and sister-in-laws Bonnie Erickson and Sue Erickson.

Lester Lee Burnham, 89 years of age from Minden, Nebraska passed away on Thursday, July 6, 2017 at Bethany Home in Minden. Funeral services will be on Tuesday, July 11, 2017 at 11:00 a.m. at the United Methodist Church in Minden with Rev. Paul... View Obituary & Service Information

The family of Lester Lee Burnham created this Life Tributes page to make it easy to share your memories.

Send flowers to the Burnham family.