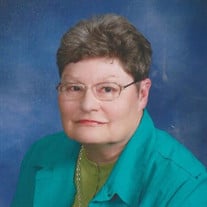 Letha Schweer Dick, 81 years of age from Arnold, NE, formerly of Scottsbluff and Bladen died on Thursday, August 11, 2016 at the Callaway Good Life Center in Callaway. Funeral services will be on Thursday, August 25, 2016 at 11:00 a.m. at the Upland United Methodist Church in Upland, Nebraska with Rev. Paul Blanchard officiating. Burial will be in the Upland Cemetery. Visitation will be one hour before services at the church. Layton-Craig Funeral Home in Minden is in charge of arrangements. Letha was born on December 24, 1934 in Upland to Tommy and Ethel (Jorden) Custer. Her early childhood was spent in the Upland area. She graduated from Upland High School in May of 1953. On June 27, 1953 she married Weldon Schweer. Two children were born to this marriage, Sonya Sue and Jeffrey Dean. She lived in Doniphan, Nelson, Grand Island, Bruning, Bladen, Scottsbluff and Arnold. Weldon passed away in 1992. Letha was a 50-year plus member of the United Methodist Church, the United Methodist Women and sewing circle. She liked to cook, bake and make sour cream and raisin pies. Letha went on 3 mission trips to Mexico, where she met Abe Dick. They were married on August 7, 1995. They moved to Scottsbluff. Abe passed away and Letha lived in Scottsbluff until late September of 2014, and then moved to Arnold to be closer to two of her grandchildren. Survivors include her son, Jeff Schweer and wife, Sharon of Everett, WA; four grandchildren, Julia Schweer, Stefanie Schweer, Shannon Olson and Eric Holberg and wife, Jacey; great grandson, Dillon and Anthony Olson nieces, Lori Norgaard and Carol Burlile; sister in-law, Mary Custer of Minden. She is preceded in death by her two husbands, Weldon and Abe, daughter, Sonya Diekmann, two sisters, Shirley Custer and Delores Benson, two brothers, LaVern and Donald Custer. Memorials are suggested to the family.

Letha Schweer Dick, 81 years of age from Arnold, NE, formerly of Scottsbluff and Bladen died on Thursday, August 11, 2016 at the Callaway Good Life Center in Callaway. Funeral services will be on Thursday, August 25, 2016 at 11:00 a.m. at the... View Obituary & Service Information

The family of Letha Schweer Dick created this Life Tributes page to make it easy to share your memories.

Send flowers to the Dick family.