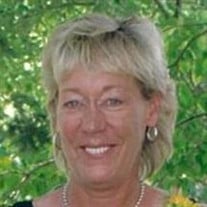 Linda Rae Olsen, 59, of Minden Nebraska passed away peacefully at her home on Tuesday, July 24, 2018 after many years of battling cancer and a stroke. Funeral services will be held at 11:00 a.m. Wednesday, August 1, 2018 at Bethany Lutheran Church in Minden with the Rev. Donald Hunzeker officiating. Interment will be held at Riverton Cemetery. Visitation will be from 5 p.m. to 7 p.m. on Tuesday, July 31, 2018 at Craig Funeral Home in Minden. In lieu of flowers, memorials are suggested to the American Cancer Society of Nebraska, Kearney Chapter. Linda was born on August 2, 1958, in Red Cloud to Jack and Ruth (Sibert) Cline. She grew up outside of Riverton and graduated from Franklin High School in 1976. She attended one semester at Kearney State College. She was united in marriage to Randy DeJonge in 1977 where they farmed and raised cattle north of Bloomington and were blessed with the birth of Kendall in 1980, and divorced in 1983. She was united in marriage to David Olsen in 1987, farmed and raised cattle and dispatched cattle trucks outside of Minden, was blessed with the birth of son Jacob in 1990, and divorced in 2004. She spent many years working for Heartland Co-op of Minden and later cleaning houses for many of her elderly friends. She was a member of Bethany Lutheran Church in Minden. Linda was very active in agriculture and gardening, loved raising and riding horses, hunting deer and fishing, and was very proud of her children and grandchildren and loved being around kids. Survivors include her mother Ruth Cline of Franklin, brother and sister in law Doug and Denise Cline of Riverton, sister Lorie Cline of Campbell, son and daughter in law Kendall and Katy DeJonge of Fort Collins, CO, son and daughter in law Jake and Michala Olsen of Axtell, and granddaughters Jayla and Jaxyn Olsen. She was preceded in death by her father Jack Cline, nephews Marshall Cline and D.J. Wendell, and niece Amanda Wendell. Tributes of memory can be shared with the family at craigfunerals.com. Craig Funeral Home is in charge of the arrangements.

Linda Rae Olsen, 59, of Minden Nebraska passed away peacefully at her home on Tuesday, July 24, 2018 after many years of battling cancer and a stroke. Funeral services will be held at 11:00 a.m. Wednesday, August 1, 2018 at Bethany Lutheran... View Obituary & Service Information

The family of Linda R. Olsen created this Life Tributes page to make it easy to share your memories.

Send flowers to the Olsen family.