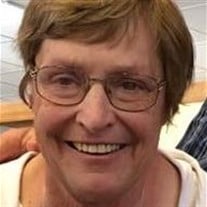 Linda K. Putnam, 67, of Hildreth, passed away on Wednesday, February 14, 2018 at her home in Hildreth. Funeral Services will be held at 10:30 a.m. on Tuesday, February 20, 2018 at Trinity Lutheran Church in Hildreth with the Revs. Steve and Patti Byrne officiating. Interment will follow services at the Fredericksburg Lutheran Cemetery south of Minden. Visitation will be held from 4:00 to 6:00 p.m. on Monday, February 19, 2018 at the Craig Funeral Home – Jelden Chapel in Hildreth. Linda Kay Putnam was born on May 10, 1950 in Blair, Nebraska to Fred N. and Dorothy M. (Novak) Pedersen. She grew up in northeastern Nebraska and graduated from Beemer High School. She then attended Bahner Beauty College. She was united in marriage to Leon Toelle in the fall o f 1969 in Beemer, NE. The couple later divorced. On August 29, 1981 she was united in marriage to Leonard Putnam in Hildreth, NE. The couple lived their entire married life in Hildreth where Linda was employed in the food service industry until she retired. Linda’s greatest enjoyment in life was her family. She also enjoyed crocheting, playing Facebook games, monthly luncheons with the town library group and of course her Diet Coke. During the summer months, Linda and her sister Barb attended several country music concerts. She was always playing her favorite country tunes while riding in the car or at night while she was on the computer. Her caring personality, love, guidance and daily doses of sarcasm will greatly be missed by everyone who knew her. She leaves to mourn her passing, her husband, Leonard Putnam; sons, Rick (Rhonda) Putnam, Dwayne Putnam, Brent (Debbie) Toelle, Ryan (Nicole) Putnam; daughter, Valerie (Toelle) Day; grandchildren, Cecilia Putnam, Annabelle, Londyn and Cayton Toelle, Madolyn Connors, Roni (Ben) McNally, Riley (Mikala) Putnam; great-grandchildren, Hudson McNally and Karter McNally; sisters, Bonnie (Dwight) Petersen, Barb Cass, Rita (Howard) McManigal, as well as a host of nieces, nephews, other relatives and friends. She was preceded in death by her mother Dorothy Fox and father, Fred Pedersen. Memorials are suggested to the family for later designation. Craig Funeral Home is in charge of the arrangements.

Linda K. Putnam, 67, of Hildreth, passed away on Wednesday, February 14, 2018 at her home in Hildreth. Funeral Services will be held at 10:30 a.m. on Tuesday, February 20, 2018 at Trinity Lutheran Church in Hildreth with the Revs. Steve... View Obituary & Service Information

The family of Linda K. Putnam created this Life Tributes page to make it easy to share your memories.

Linda K. Putnam, 67, of Hildreth, passed away on Wednesday, February...

Send flowers to the Putnam family.