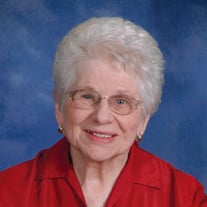 Lois W. Bienhoff, 87, of Hildreth passed away on Tuesday, October 10, 2017 at her home. Funeral services will be held at 2:00 p.m. on Saturday, October 14, 2017 at Trinity Lutheran Church in Hildreth with the Revs. Steve and Patti Byrne officiating. Following services, Interment will be held at the St. Peter’s Lutheran Cemetery in Hildreth. Visitation will be held from 5:00 to 7:00 p.m. on Friday, October 13, 2017 at the Craig Funeral Home – Jelden Chapel in Hildreth. Craig Funeral Home is in charge of the arrangements. Lois W. Bienhoff was born on January 22, 1930 in Kearney County, Nebraska to Frank and Mary (Weber) Keiser. She was baptized on February 23, 1930 at the Emanuel Lutheran Church south of Hildreth, Nebraska and confirmed on May 28, 1944 by Pastor E.J. Moede. She grew up on the family farm northwest of Hildreth, attending first through third grades at a rural country school, and went on to graduate from Hildreth High School in 1947. After graduation, Lois moved to Lincoln to attend business school, graduating and finding employment in an insurance office there. After a year, she moved to Kearney to work for a CPA until her marriage to the love of her life, Herbert Bienhoff. Herb and Lois were married on March 11, 1951. They moved to a farm northwest of Hildreth and raised four children: sons Lynn and Kim, and daughters Tami and Winkie. Herb retired from farming in 1990, and in 2001 they moved from the farm into Hildreth. Lois was always a busy mother and farmwife, selling milk, eggs, and Fuller Brush products while she kept up with her children’s sports and 4H activities. She was an active member of St. Peter’s Lutheran Church and later Trinity Lutheran Church, the VFW Auxiliary, and other neighborhood and social organizations. She loved Jesus Christ, her family, her poppies, and during the last years of her life, her faithful dog Cookie. Lois was preceded in death by her loving husband of 63 years, Herbert. She is survived by her children Lynn (Suzi) Bienhoff of Saginaw, MI, Kim (Nola) Bienhoff of Shawnee, KS, Tami (Jim) Fuerst of Wilcox, NE and Winkie (Greg) Smith of Olathe, KS; nine grandchildren and eleven great-grandchildren. Her brother, Dwaine preceded her in death. Her loving presence will be missed by all. Memorials are suggested to the Trinity Lutheran Church in Hildreth.

Lois W. Bienhoff, 87, of Hildreth passed away on Tuesday, October 10, 2017 at her home. Funeral services will be held at 2:00 p.m. on Saturday, October 14, 2017 at Trinity Lutheran Church in Hildreth with the Revs. Steve and Patti Byrne... View Obituary & Service Information

The family of Lois W. Bienhoff created this Life Tributes page to make it easy to share your memories.

Lois W. Bienhoff, 87, of Hildreth passed away on Tuesday, October...

Send flowers to the Bienhoff family.