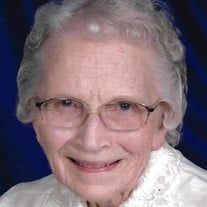 Lois E. Garton, 94, of Minden, passed away on Sunday, February 11, 2018 at Kearney County Health Services – Countryside Living in Minden. Funeral services will be held at 10:00 a.m. on Thursday, February 15, 2018 at the Craig Funeral Home in Minden with the Rev. Paul Blanchard officiating. Interment will be held in the Upland Cemetery. Visitation will be held from 4:00 to 6:00 p.m. on Wednesday, February 14, 2018 at Craig Funeral Home in Minden. Lois Eleanor Garton was born near Upland, NE on March 28, 1923 to Roy E. and Grace J. (Husband) Imhof. At age 7, the family moved to a farm near Selden, KS. She finished her schooling through high school at Selden. Lois married Dale Ivan Garton on September 18, 1946 at the family home in Selden. They lived in various places in Nebraska before retiring in Arapahoe, NE. Lois was a homemaker, but at times had jobs as a bookkeeper and bank teller. She volunteered at the senior center in Arapahoe for several years and was a member of the Methodist church for over 75 years. She played Organ for churches in Selden and Bartley. Lois loved music, jigsaw puzzles, sewing, crocheting, reading and doing Sudoku. She leaves to mourn her passing, her daughter, Nora Jane and husband Ivan Schukei of Campbell, NE; four grandchildren, Carol and husband Sean Herring and Victoria of Stillwater, OK; Steven and Estelle Schukei of Glen Ridge, NJ; Karen Schukei of Arapahoe, NE; Robert and wife Cindy Schukei of Baldwin City, KS; great-grandchildren, Calvin, Evelyn and Benjamin Schukei, Joseph and Earl Callahan, Nicholas and Ella Schukei, as well as a host of other relatives and friends. Lois was preceded in death by her parents, her husband, Dale in 1986 and an infant brother, Vyrl. Memorials are suggested to Boys Town. Craig Funeral Home is in charge of the arrangements.

The family of Lois E Garton created this Life Tributes page to make it easy to share your memories.

Send flowers to the Garton family.