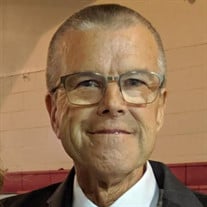 Lon B. Mills, 61, of Minden, passed away on Thursday, November 12, 2020 at Kearney County Health Services in Minden. Private family graveside services will be held at the Minden Cemetery with the Rev. Donald Hunzeker and Rev. Peter Choi officiating. Public visitation will be held from 3:00 to 6:00 p.m. on Wednesday, November 18, 2020 at Craig Funeral Home in Minden. The current health recommendations will be followed and the use of a face covering is required. Memorials in Lon’s honor are kindly suggested to the family for later designation. Craig Funeral Home is in charge of the arrangements. Lon Brandon Mills was born on July 18, 1959 in Minden to Lee H. and LaVada M. (Casper) Mills. He grew up in the Minden area and graduated from Minden High School with the class of 1978. He later attended technical school. He was united in marriage to Kelly J. Maxon in May of 1980 in Minden and to this union, three children were born: Brooke, Ann, and Spencer. The family made their home south of Minden where Lon helped with the family farming and livestock operation up until his passing. Lon was baptized and confirmed at St. Peter’s Lutheran Church in Hildreth and attended the Minden United Methodist Church. He was also a member of various drag racing and go-cart racing organizations. His hobbies included racing, building model rockets, shooting sports, and fishing. He absolutely loved Husker football. Lon was also known for sneaking into the family’s hidden candy stash to satisfy his sweet tooth! His children and grandchildren were truly the apple of his eye and he enjoyed spending every minute he could with them. He attended every activity of theirs he could and was an avid supporter of any endeavor they pursued. Most recently, he enjoyed watching his grandchildren fly kites in the Nebraska wind. Those left to cherish his memory include is wife, Kelly of Minden; daughter, Brooke and husband Joseph Lundeen of Axtell; son, Spencer and wife Breanna Mills of Kearney; grandchildren, Joanna and Selma Lundeen; father, Lee Mills of Minden; sister, Lynne Mills of Mendota Heights, MN; his beloved dog, Allie; as well as a host of extended relatives and friends. He was preceded in death by his mother, LaVada Mills; daughter, Ann Mills; sister Lori Lea Mills; and Father and Mother-in-law, Adrian “Snowy” and Eleanor Maxon. Tributes and memories can be shared with the family at www.craigfunerals.com.

Lon B. Mills, 61, of Minden, passed away on Thursday, November 12, 2020 at Kearney County Health Services in Minden. Private family graveside services will be held at the Minden Cemetery with the Rev. Donald Hunzeker and Rev. Peter Choi... View Obituary & Service Information

The family of Lon B. Mills created this Life Tributes page to make it easy to share your memories.

Send flowers to the Mills family.