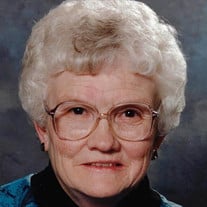 Luella E. Frerichs, 89, of Axtell, passed away on Monday, March 26, 2018 at the Phelps Memorial Health Center in Holdrege. Funeral services will be held at 10:30 a.m. on Saturday, March 31, 2018 at Trinity Lutheran Church in Hildreth with the Revs. Patti and Steve Byrne officiating. Private family interment will be held following services at the Emmanuel Lutheran Cemetery south of Hildreth. Visitation will be held from 4:00 to 6:00 p.m. on Friday, March 30, 2018 at the Craig Funeral Home – Jelden Chapel in Hildreth. Luella was born on March 6, 1929 on the family farm in rural Franklin County, NE to Ocke and Martha (Johnson) Bunger. She was baptized on March 24, 1929 and was confirmed on June 13, 1943 at Emmanuel Lutheran Church in Hildreth. She later became a member of Trinity Lutheran Church in Hildreth. Luella attended District 42 country school. Luella worked as the telephone operator for the Village of Macon and after moving to Axtell, she worked at the Orange Coach, cleaned the city hall building and worked at Mosaic in many different capacities. While at Mosaic, she received an award at a banquet in Omaha for working over 23 years without missing a day of work. She continued to work for Mosaic until retiring at the age of 78. Her hobbies included playing cards, completing word search puzzles and watching game shows and westerns on TV. She also played on the Axtell softball team for a number of years. Her true love was spending time and having fun with her family. Luella was known for always having a snack table at her house and festive favors for each holiday gathering. She especially enjoyed having Easter Egg hunts with her grandchildren, regardless of their age. Luella also enjoyed cooking. She was known by many for her amazing meatballs, Italian Corn and her impossible-to-duplicate homemade Mac and Cheese. Those left to cherish her memory include her daughters, Judy Osborn of Axtell, Dianna DeJonge and husband Allan of Franklin and Marian Decker and husband Ron of Spokane Valley, WA; grandchildren, Ryan Decker and wife Janet of Deer Park, WA, Randee Arrington and husband Kyle of Mead, WA, Marcy DeJonge of Republican City, Mindy DeJonge of Alma and Melissa DeJonge and Husband Mark Cox of Gardiner, MT; five great-grandchildren; sisters, Lorrena Kersenbrock of Hildreth and Carol Mae Gramke and husband Merrill of Upland; sister-in-law, Beulah Bunger of Franklin, as well as a host of nieces, nephews, other relatives and friends. She was preceded in death by her parents, brother Orval Bunger and brother-in-law, Myron Kersenbrock. Memorials are suggested to the family for later designation. Craig Funeral Home is in charge of the arrangements.

Luella E. Frerichs, 89, of Axtell, passed away on Monday, March 26, 2018 at the Phelps Memorial Health Center in Holdrege. Funeral services will be held at 10:30 a.m. on Saturday, March 31, 2018 at Trinity Lutheran Church in Hildreth with the... View Obituary & Service Information

The family of Luella E Frerichs created this Life Tributes page to make it easy to share your memories.