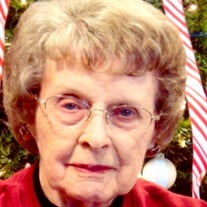 Marcella Mae (Nelson) Weis, age 91, of Kearney died Friday, June 16, 2017, at St. John’s Good Samaritan Center in Kearney. Funeral services will be Wednesday, June 21, 2017 at 2:00 PM at the Trinity Evangelical Lutheran Church in Axtell with the Rev. Karen Lynn Woo and the Rev. Gale Dorn officiating. Interment will be at Pleasant Hill Cemetery in Axtell following services. Visitation will be from 5:00 to 7:00 p.m. Tuesday, June 20, 2017 at the Craig Funeral Home in Minden. Craig Funeral Home in Minden is in charge of arrangements. Marcella was born on August 20, 1925 in rural Axtell, the first of four children to Arnold and Anna (Anderson) Nelson. She was baptized, October 11, 1925, and Confirmed, August 13, 1939 at Trinity Lutheran Church in Axtell. She grew up in Axtell where she participated in 4-H and softball. She excelled in cooking and sewing and went on to win numerous ribbons and awards. She graduated from Axtell High School in 1943 and went on to the University of Nebraska to study Home Economics. The following summer she worked in Lincoln at the Goodyear Defense plant manufacturing war materials. It is in Lincoln that she met a young soldier by the name of Lloyd Weis, who was stationed at the Lincoln Air Base. She was united in marriage to Lloyd Weis on January 13, 1945 in Hugo, Oklahoma. During World War II she worked at the Kearney Air Base making parachutes. After Lloyd returned home from World War II, the couple lived in Axtell where she worked at Bethphage Mission, her parent’s cafe, making handmade clothing, and the couple started raising a family. Later they moved to Valentine where Lloyd was in the automotive parts business and she served as Office Manager and worked part time at the church. In the early 70’s they moved to Chadron where Lloyd managed an automotive parts store and she worked as Office Manager. In 1974 they moved back to Valentine when they purchased Sidles Auto Parts Store and she served as Office Manager and assisted with sales. She also worked part time at the church. They sold the business and retired in 1989. Marcella was very active in the Valentine Presbyterian Church and Presbyterian Women. You could count on her being in the church kitchen cooking something delicious for the Father’s Day Banquet or the May Day Breakfast. She was also an active member of the VFW and American Legion Auxiliary and the Order of Eastern Star. She was a talented seamstress and excellent cook. From childhood she was involved in 4-H as a member and leader. She was the devoted care giver of her late husband in the years preceding his death. She was a caring loving daughter, sister, wife, mother, grandmother, and great grandmother. Upon retirement, Lloyd and Marcella moved to Cherry Hills Assisted Living where she could better care for Lloyd because of his failing health. After Lloyd’s death in 2011, she continued to live at Cherry Hills until her health started to deteriorate. She moved to St. John’s Good Samaritan Center in Kearney in April of 2015. Marcella was preceded in death by her husband, Lloyd; her parents; twin brother and sister, Harold Dean and Helen Jane and two granddaughters Ashley Cahill and Lisa Weis. Survivors include her son, Darrel Weis and wife Kathy of Kearney; daughter, Vickie Cahill and husband Jim of San Antonio, Texas; grandchildren, Brett Weis and wife Kristy of Kearney, Michael “Shane” Cahill and his wife Jamie of San Antonio, Texas and Kylee Cahill of San Antonio, Texas; great-grandchildren Emma, Ellie, Zachary, Daniel and Jinyi Weis of Kearney, Caleb, Chelsea, Cameron and Chance Cahill of San Antonio, Texas; sister, Betty Wilberger of Nebraska City, and many nieces, nephews and other relatives and friends. Memorials have been designated to the Valentine Presbyterian Church and AseraCare Hospice in Kearney. Online condolences may be submitted by visiting laytoncraigfuneralhome.com

The family of Marcella Mae Weis created this Life Tributes page to make it easy to share your memories.

Send flowers to the Weis family.