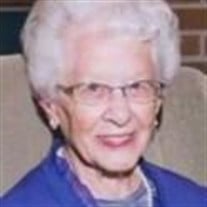 Marguerite R. Lynn, age 101, died Friday, January 26, 2018, at Abby Park in Grand Blanc, Michigan. Marguerite was born in Valentine, Nebraska on December 7, 1916 to Harry and Alice Wells. The family later moved to Clay Center, Nebraska where she grew up, the oldest girl in a family of four boys and three girls. She graduated from Clay Center High School. After graduation, she worked for the U.S. Department of Agriculture, where she met Adrian Lynn. On February 3, 1940, she married Adrian Lynn in Omaha, Nebraska. In 1946, Marguerite, along with her husband and daughter, moved to the Lynn family farm southeast of Minden, Nebraska. She and Adrian lived on the farm until moving to Minden in 1967, and then to Bethany Home Assisted Living in Minden in 2003. In 2007, after the death of Adrian, Marguerite moved to Abbey Park Independent Living in Grand Blanc, Michigan to be near family. Marguerite was a loving wife, mother, grandmother, and great grandmother. She was a homemaker and talented seamstress who enjoyed sewing for herself, her daughter, and granddaughters. Marguerite was an active member of Westminster United Presbyterian Church in Minden. She was also a loved "Aunt Sis" to many nieces and nephews. Survivors include her daughter, Joy (Jack) Hershberger of Grand Blanc, Michigan; granddaughters, Amy (Matt) Wing of East Grand Rapids, Michigan, and Judi Hershberger of Livonia, Michigan; seven great-grandchildren , Lily, Katelyn, Evelyn, and Lukas Wing and Alexander, Emelia, and Genevieve Cosenza as well as a host of nieces, nephews, other relatives and friends. She was preceded in death by her parents, husband Adrian, infant daughter Sally Jean, four brothers, and two sisters. Visitation will be held from 4:00 to 6:00 p.m. on Monday, February 5, 2018 at Craig Funeral Home in Minden. Funeral services will be held at 11:00 a.m. on Tuesday, February 6, 2018 at Westminster United Presbyterian Church in Minden with the Rev. Daniel Davis officiating. Private family burial will take place prior to services at May Cemetery near Norman, NE. Memorials are suggested to Westminster United Presbyterian Church in Minden, to May Cemetery, or to Bethany Home in Minden. The family would like to give special thanks to the staff and Medical Team at Abbey Park, especially Connie, Ashley and Peyonca. Craig Funeral Home is in charge of the arrangements.

The family of Marguerite R. Lynn created this Life Tributes page to make it easy to share your memories.

Send flowers to the Lynn family.