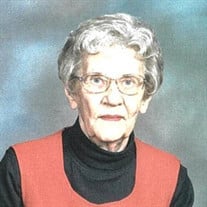 Marilyn J. Dyke, 89, of Minden, passed away on Tuesday, April 20, 2021 at CHI Health – Good Samaritan Hospital in Kearney. Private family graveside services will be held at the Minden Cemetery at a later date. There will be no visitation as the family has honored Marilyn’s wish to be cremated. Memorials in Marilyn’s honor are kindly suggested to the St. Paul Lutheran Church in Minden or to the Minden Volunteer Fire Department. Craig Funeral Home in Minden is in charge of the arrangements. Marilyn was born April 21, 1931 to Reuben and Velma (Lammers) Anderson in Hildreth, NE. She was raised in Upland where she graduated from Upland High School. Marilyn was baptized March 24, 1940 at Upland Methodist Church and was confirmed on February 20, 1949 at Evangelical Lutheran Church. On June 12, 1949 she married Glenn C. Ruhter in the Lutheran Church in Upland. They moved to Minden where she has resided since that time. Three sons, Michael, Rodney and Ron were born to this union. On September 29, 1967 she married Dennis D. Dyke. She worked for the United States Department of Agriculture for 30 years and retired in 1996. Her concerns were her spiritual well being, her family and home. She was an avid reader and enjoyed crocheting. She is preceded in death by her husband’s, Glenn Ruhter and Dennis Dyke; son, Michael who died for his country in Vietnam; father, Reuben; mother, Velma Hendricks; stepmother, Marie Anderson, and step-father, J.C. Hendricks, and step-grandchildren, John Dyke and Robert Jenner. Those left to cherish her memories include her sons, Rodney Ruhter and wife, Cheryl, of Lincoln; Ron Ruhter and wife, Chris, of Waco, TX; grandchildren, Jennifer Dunn and husband Justin, Joshua Fandry and wife, Paula, Grant Ruhter and wife, Lindsay, and Meg Ruhter; step-grandchildren, Jerry Dyke and Jolene Dyke; great-grandchildren, Olive and Otis Ruhter, Riley Dunn, Jake Fandry and wife, Michaela; step-great-grandchild, Sarah Jenner; as well as a host of extended relatives and friends. Tributes and memories can be shared with the family at www.craigfunerals.com.

Marilyn J. Dyke, 89, of Minden, passed away on Tuesday, April 20, 2021 at CHI Health &#8211; Good Samaritan Hospital in Kearney. Private family graveside services will be held at the Minden Cemetery at a later date. There will be no visitation... View Obituary & Service Information

The family of Marilyn J. Dyke created this Life Tributes page to make it easy to share your memories.

Send flowers to the Dyke family.