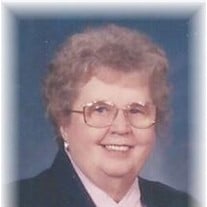 Marilyn J. Soderquist, 90 years of age from Minden passed away Tuesday, October 11, 2016 at the Bethany Home in Minden. Funeral services will be on Saturday, October 15, 2016 at 11:00 a.m. at the Bethany Lutheran Church south of Axtell with Reverend David Evenson officiating. Burial will be in the church cemetery. Visitation will be at the Layton-Craig Funeral Home in Minden on Friday from 4-6 p.m. Marilyn was born on June 10, 1926 in Minden, NE to Albert and Lillie (Petersen) Rundquist. She grew up in the Minden area and graduated from Minden High School in 1945. On February 22, 1948 she married Willard Soderquist. They lived and farmed in the Axtell area until 1994 when they moved to Kearney. Over the years Marilyn worked for the Axtell school system as a bookkeeper and for many years she was the director of the Axtell Housing Authority but most importantly, she was a busy farm wife, mother and grandmother. Marilyn was a member of the Bethany Lutheran Church south of Axtell where she was an active member in her church circle. She was also a member of the Axtell Women’s Auxiliary. Marilyn enjoyed playing cards, visiting with her many friends and relatives. She loved spending time with her grandchildren and great grandchildren and attending their various activities. Survivors include her daughter, Deanna Nelson and husband, Marv of Harvard; son, Rendell Soderquist of Axtell; six grandchildren, Scott Nelson of Lincoln, Jodi (Brian) Behlen of Waverly, Lacy (Ashish) Pokharel, Tammy (Dan) Vlock, Ashley (Corey) Wilson all of Omaha and Holly (Jeremy) Pracht of Kearney; 11 great grandchildren, Jordyn and Rylan Behlen, Eve, Jules and Van Nelson, Hannah and Sierra Pokharel, Eddie and Logan Pracht and Ben and Bailey Vlock; twin sister, Marian Johnson of Minden; sister in-law, Ruth Soderquist of Kearney and brother in-law, Dale Space of Minden. She is preceded in death by her husband, Willard, brother, Durward Rundquist and sister Vivian Space.

Marilyn J. Soderquist, 90 years of age from Minden passed away Tuesday, October 11, 2016 at the Bethany Home in Minden. Funeral services will be on Saturday, October 15, 2016 at 11:00 a.m. at the Bethany Lutheran Church south of Axtell with... View Obituary & Service Information

The family of Marilyn J. Soderquist created this Life Tributes page to make it easy to share your memories.

Marilyn J. Soderquist, 90 years of age from Minden passed away...

Send flowers to the Soderquist family.