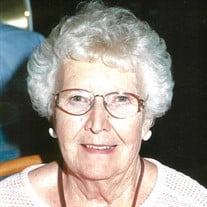 Marjorie “Marj” L. Wendell, 90, of Kearney, formerly of Axtell, passed away on Wednesday, April 27, 2022 at Mt. Carmel – Keens Memorial Home in Kearney. Funeral services will be held at 10:30 a.m. on Monday, May 2, 2022 at First Presbyterian Church in Axtell with the Rev. Logan Ellis officiating. The service will be streamed to the church’s Facebook page. Interment will be held following the service at the Pleasant Hill Cemetery in Axtell. Visitation will be held from 3:00 to 5:00 p.m. on Sunday, May 1, 2022 at Craig Funeral Home in Minden. Memorials in Marj’s honor are kindly suggested to the First Presbyterian Church in Axtell, the Axtell Community Foundation, or to Hastings College. Arrangements are under the care of Craig Funeral Home in Minden. Marjorie Wendell was born on September 8, 1931 in Kearney, Nebraska to Bert C. Danly and Grace E. (Moore) Danly. She graduated from Axtell High School in 1949 and the University of Nebraska (Lincoln) in 1953 with a Music Education degree. Her time at UNL allowed her to showcase her musical talent in many ensembles and as a soloist. She continued her musical performances by being active in the Axtell Mastersingers (later the Axtell Oratorio Society) where she was the alto soloist in the presentation of Handel’s Messiah for many years since 1958. She was married to Robert W. Wendell (deceased) on July 11, 1953; they were together for fifty years. They raised four sons on the Wendell family farm near Axtell. In addition to raising their sons and supporting the farm, Marj was a substitute music teacher in Axtell and after her sons went to college she spent many years teaching music at the R-6 school in Phelps County. Throughout her life, Marj was very active in the Axtell community. The Danly family were founding members of the First Presbyterian Church of Axtell and she was a leader within the First Presbyterian Church and the local (Presbytery), regional (Synod) and national (General Assembly) governance of the Presbyterian Church USA. She also enjoyed the social opportunity and mental challenge of duplicate bridge playing in tournaments where she achieved Life Master status. Marj was a long-time member of the Farmerettes Extension Club, and along with Bob participated in several card clubs with close friends. Marj’s true legacy is the family she built. She is survived by her four sons and their families: Steve Wendell of Axtell (4 daughters, 2 sons, 5 spouses and 4 grandchildren); Lowell Wendell of California (1 daughter, 3 sons, 2 spouses and 8 grandchildren); Don and Pam Wendell of Colorado (1 daughter and spouse, 2 sons); Alan and Deidre Wendell of Pennsylvania (1 daughter and 1 son). Family always came first for Marj. When she realized her sons were going to be involved in football, she took a college course on football theory in order to better understand the game. Marj and Bob could be found at most sporting events or extracurricular events that their children or grandchildren were participating. Her vocal training enabled her son’s to easily recognize her cheers in a crowded stadium or across a state tournament arena with her signature “YaHOO”. Her grandchildren fondly remember her for her cooking (milkshakes, cinnamon rolls, molasses crinkles cookies, rye bread); the importance of music in life, and the many, many games of pitch played when they were together. But mostly, they remember her warmth and open heart. Give grandpa a hug for us. Tributes and memories can be shared with the family at www.craigfunerals.com.

The family of Marjorie "Marj" L. Wendell created this Life Tributes page to make it easy to share your memories.