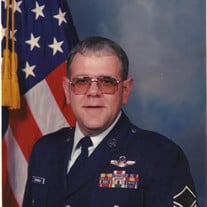 Mark T. Cavanaugh, 61, of Altus, OK, passed away on Wednesday, December 19, 2018 at his home. A Mass of Christian Burial will be held at St. John’s Catholic Church in Minden on Monday, December 31, 2018 at 10:00 a.m. with the Rev. Julius Tvrdy officiating. Interment will be held following services at the Minden Cemetery with military honors provided by Offutt Air Force Base in conjunction with the Minden American Legion and Heartwell V.F.W. There will be no visitation and the casket will be closed. Memorials in Mark’s honor are suggested to the family for designation at a later time. Craig Funeral Home is in charge of the arrangements. Mark T. Cavanaugh was born on July 16th, 1957 to Lawrence “Larry” and Delores (Exstrom) Cavanaugh in Minden, NE. He was baptized at Saint John’s Catholic Church in Minden, NE on July 28, 1957. He graduated from Minden High School in 1975. Mark enlisted into the United States Air Force on May 3, 1976. He proudly served his country for over 25 years. His decorations include: the Meritorious Service Medal with 3 oak leaf clusters, the AF Achievement Medal with 3 oak leaf clusters, the Combat Readiness Medal with 1 oak leaf cluster, the National Defense Service Medal, the AF Good Conduct Medal with 7 oak leaf clusters and the Southwest Asia Service Medal for his contributions during Desert Storm/Desert Shield. SMSgt Cavanaugh was a C-141 Loadmaster and held several different positions in that career field to include: Instructor Loadmaster, Standardization and Evaluation Flight Examiner and Chief of C-141 Loadmaster Training. He retired from the United States Air Force on October 31, 2001 at the rank of Senior Master Sergeant. Mark, known to family and friends as “The General”, came from a flying and farming background in rural Nebraska. He soloed at the age of 16 and received his private pilot’s license in 1984. His other interests included fishing, hunting, camping, and spending time with his children, grandson, family and friends. He is survived by his two children; Aaron of Minden, NE and Mandy Richards (Les), and Grandson Jackson Richards, all of Oklahoma City, OK. He is also survived by his brothers Michael (Janet), Matthew, sister Debra, (Dan), and David (Donna), all of Minden, NE, several nephews, nieces, cousins, his close friend Gleni and numerous other friends. Mark is preceded in death by his father Larry, his mother Delores, and an infant sister. Tributes of memory can be shared with the family at www.craigfunerals.com.

The family of Mark T. Cavanaugh created this Life Tributes page to make it easy to share your memories.