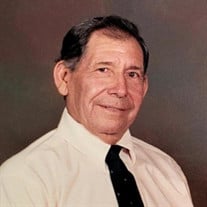 Martin Ruiz, Jr., 100, of Minden, passed away on Monday, February 28, 2022 at Kearney County Health Services in Minden. A funeral mass will be held at 11:00 a.m. on Tuesday, March 8, 2022 at St. John’s Catholic Church in Minden. The service will be live streamed to the funeral home’s Facebook page. Private family interment will be held prior to services at the Minden Cemetery. Visitation will be held from 4:00 to 6:00 p.m. on Monday, March 7, 2022 with a Rosary service at 6:00 p.m. at Craig Funeral Home in Minden. In lieu of flowers, memorials are suggested to the St. John’s Catholic Church Altar Society. Craig Funeral Home is in charge of the arrangements. Martin was born on November 3, 1921 in Lytle, Texas to Martin, Sr. and Cassena (Felan) Ruiz. He grew up and attended school in Asherton. Martin had a profound love for baseball and played on a traveling team where he also met the love of his life, Zoila Villarreal. The couple was united in marriage on February 20, 1946, in Asherton and to this union, five children were born: Gerard “Fred”, Joe, and two sons and one daughter that passed away during infancy. The family made their home in Asherton until moving to Atlanta, Nebraska where Martin was employed at Luther Packing Company. In 1953, they moved to Minden where Martin was employed by TriCo Feed Mills until retiring in 1988. During retirement, Martin worked for the City of Minden for six years. He was a faithful member of the St. John’s Catholic Church for many years. Martin moved to Hinterlong Living and later to Bethany Home, both located in Minden. Martin was a loving father and friend. He was a devoted fan of the Los Angeles Dodgers and their all-star pitcher, Sandy Koufax, but most of all; he enjoyed time spent with family, especially his grandchildren and great-grandchildren. Those left to cherish his memory include his sons, Gerard “Fred” Ruiz and wife, Jeanne of Omaha, NE, and Joe Ruiz and wife, Tracey of Denton, NE; grandchildren, Micaila Ruiz, Christopher Ruiz, Andrew Ruiz, and Nicholas Ruiz; great-grandchildren, Isla, Zoila, Charles, Griffin, Cameron, and Sean; as well as a host of nieces, nephews, extended relatives and close friends. He was preceded in death by his parents, his wife, two sons and one daughter; siblings, Mercedes Ruiz Martinez, Juan Felan Ruiz, Felan Ruiz, Apolinar Ruiz, Manuel Ruiz, Juan Ruiz, Jose Guadalupe Ruiz, and Ebrumilda Ruiz Martinez; half-sisters, Maria Gonzalez and Ramona Gutierrez. Tributes and memories can be shared with the family at www.craigfunerals.com.

The family of Martin Ruiz Jr. created this Life Tributes page to make it easy to share your memories.