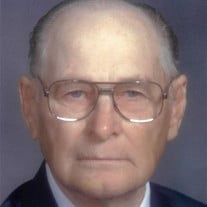 Marvin Vaughn Scharff, 94, of Hastings, formerly of Norman drew his last breath of life on Tuesday, May 29, 2018 at Mary Lanning Hospital in Hastings, surrounded by his family, following a stroke on Sunday evening, May 27. Funeral services will be held at 10:30 a.m. on Saturday, June 2, 2018 at St. Paul Lutheran Church in Minden with the Rev. Christopher Hazzard officiating. Interment will be held following services at the Minden Cemetery with military honors presented by the Minden American Legion and Heartwell Veterans of Foreign Wars in conjunction with the Unites States Navy Honors Team. Visitation will be held from 5:00 to 7:00 p.m. on Friday, June 1, 2018 at the Craig Funeral Home in Minden. Memorials are suggested to the St. Paul Lutheran Church in Minden or to Lutheran Hour Ministries. Marvin Vaughn Scharff was given his first breath of life by the Lord on July 21, 1923, in Franklin County, Nebraska, born the son of Ernest and Lena (Lammers) Scharff. Not long after his birth, Marvin was baptized on August 26, 1923 at Zion Lutheran Church in Upland, becoming a child of God and an heir of everlasting life in Jesus Christ. On October 31, 1937, Reformation Sunday, he publicly professed his Christian Faith through the rite of confirmation at Zion Lutheran Church in Upland. Marvin grew up on a farm southwest of Upland until the age of 13 when he moved with his family to a farm south of Norman. He graduated from Norman High School in 1941. Marvin helped his father and farmed for himself until 1944 when he was drafted into the service, becoming a Master of Arms in the United States Navy. He served 13 months overseas. In June of 1946, Marvin was discharged and returned to farming in the Norman area. He met his future bride, Reatha Carlson, at a dance in Heartwell, Nebraska on September 25, 1943. Dancing continued to be their lifelong entertainment. Marvin was the only boyfriend Reatha ever had or dated. Reatha was the only girl that Marvin ever took home, and she was the love of his life. This was special to them. They were committed to fulfilling their wedding vows, “And two shall become one.” On April 26, 1947, his parent’s 25th wedding anniversary, he was united in marriage to Reatha Carlson at her church, Bethany Lutheran Church, near Axtell. God blessed this union with three daughters, Kathleen Ann, Karmen Sue, and Karlene Marie. Marvin and Reatha farmed west of Norman for nine years, and farmed north of Norman for 30 years with their family, until moving into Norman in 1983. Marvin raised and milked 20-30 dairy cattle from 1964 to 1970. After selling the dairy cattle, he hauled gravel for Kearney County for 12 years. He served for six years on the Norman Public School Board. Marvin continued to farm and worked at Norman Elevator from 1983-1985. In February of 1985, he began working for Farmers Union COOP until July of 1990. In December of 1986, Marvin retired from farming for himself, but continued to help other farmers during harvest and spring planting seasons. After moving to Norman, he served on the Norman Town Board for a number of years. Marvin was a loving and devoted husband, father, and grandfather. He enjoyed spending time with his great grandchildren, grandchildren, family, and friends. He enjoyed dancing; playing cards; horses; gardening; watching movies, especially westerns; reminiscing; and reading old letters that he had sent and received while he was in the service. Marvin still had over 500 letters that he and Reatha had written while he was in the U.S. Navy. He was a member of St. Paul Lutheran Church in Minden. He is survived by three daughters, Kathleen Nelson and her husband Roger, of Hastings, Karmen Sears and her husband Tom, of Kearney, Karlene Reed and her husband Gary, of Juniata; eight grandchildren, Amanda Nelson of Lyons, CO, Philip Nelson and his wife Megan of Hastings, Collin Sears and his wife Macy of Overland Park, KS, Connor and Kendra Sears of Kearney, Creighton Reed and his wife Shelby of Kearney, Breckon Reed and his fiancé Kaylee Fike of Kearney, and Shaylee Reed of Juniata; two great grandchildren, Ellie and Luke Nelson of Hastings; one sister-in-law, Erma Jean Scharff, several nieces, nephews, and a host of family and friends. Marvin was preceded in death by his parents, wife, brother, Delmar, and sister, Verlene. Tributes of memory can be shared with the family at craigfunerals.com Craig Funeral Home is in charge of the arrangements.

Marvin Vaughn Scharff, 94, of Hastings, formerly of Norman drew his last breath of life on Tuesday, May 29, 2018 at Mary Lanning Hospital in Hastings, surrounded by his family, following a stroke on Sunday evening, May 27. Funeral services will... View Obituary & Service Information

The family of Marvin V. Scharff created this Life Tributes page to make it easy to share your memories.

Send flowers to the Scharff family.