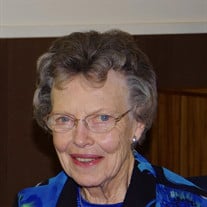 Mary Lou Kristensen, 87 years of age from Minden, NE passed away on June 11, 2017 at the Bethany Home in Minden. Funeral services will be on Thursday, June 15, 2017 at 10:30 a.m. at the St. John’s Catholic Church in Minden with Father James Benton officiating. Visitation will be on Wednesday from 3-5:30 p.m. at the Craig Funeral Home in Minden. Rosary will be recited at 7:00 p.m. at the church. Mary Lou Kristensen, born Mary Lucinda Martin, February 24, 1930, in Kenesaw, Nebraska. She was the daughter of Walter Bernard Martin and Anna Ella Martin (McCormick). She grew up in the Kenesaw area and graduated from Kenesaw High School in 1947, with her diploma and Professional and Normal Training certificate. After passing the state exam, she began her teaching career at the age of 17 in a one-room school, District 54 in rural Kearney County. The next year, District 14 in Adams County offered her a raise in salary and she moved on to that one-room school. She soon realized that to be a better teacher she needed a college education. The next year she attended Nebraska State Teachers College in Kearney, Nebraska. She graduated in 1952. She then taught in Lexington for one year. She married Donald Marinus Kristensen on November 22, 1953 at Sacred Heart Catholic Church in Kenesaw. They began farming north of Minden. They had two sons, Douglas Allan Kristensen, and Duane Martin Kristensen. After having her sons, Mary Lou returned to Kearney State College to obtain a Masters Degree in Education in 1962. She began teaching in Minden Public Schools in 1961. She taught junior high school English, World Geography and Science. In 1968 she became the high school librarian until she retired in 1992. She loved students of all ages. After retirement, Mary Lou continued to be active in the farming operation and travelled frequently with Don and his brother, Eugene and wife, Mary Jean. She was active in Delta Kappa Gamma, the Kearney County Museum, the Minden Opera House, and St. John's Church. Mary Lou proudly followed the careers of her sons. She eagerly accepted daughters-in-law as the girls of the family. Grandchildren brought great joy to Mary Lou. She loved following their activities and accomplishments. She was thrilled to be inducted into the first class of One Room, One Teacher honorees from the College of Education at the University of Nebraska at Kearney in 2012. Her favorite hobbies were reading, dancing with Don, and collecting and preserving the family history. She is survived by her husband; son Douglas Kristensen and wife Terri S. Harder, of Minden; son Duane Kristensen and wife Deborah (Stones) of Minden; grandchildren Morgan Kristensen, Paige Kristensen, Katerina White and husband Zane, Daniel Kristensen, Jenna Kristensen and great-granddaughter Scarlett White; brother John Martin; sister Esther Colburn and husband Larry; and a number of nieces and nephews. She was preceded in death by her parents. Memorials are suggested to the University of Nebraska Foundation One Room, One Teacher Scholarship Fund and St. John's Catholic Church of Minden.

The family of Mary Lou Kristensen created this Life Tributes page to make it easy to share your memories.

Send flowers to the Kristensen family.