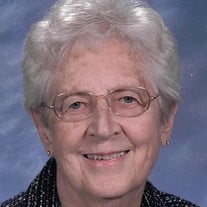 Mary Lea Butler, 92, of Minden, NE passed away on Sunday, December 3, 2017 at Bethany Home in Minden. Funeral services will be held at 10:30 a.m. on Friday, December 8, 2017 at the Minden United Methodist Church with the Rev. Paul Blanchard officiating. Interment will follow services at the Minden Cemetery. Visitation will be held from 5:00 to 7:00 p.m. on Thursday, December 7, 2017 at the Craig Funeral Home in Minden. Craig Funeral Home is in charge of arrangements. Mary Lea was born on December 5, 1924 in Cowles, NE to Earl & Laura (McTaggart) Boner. She grew up in Cowles and graduated from Cowles High School in 1942. She taught country school near Cowles for 2 years prior to attending Nebraska Wesleyan University from 1944 to 1948. After graduating from Wesleyan, she taught high school in Exeter, NE for a year. She married Robert E. Butler on June 15, 1949 in Lincoln, NE. She taught at Beal’s Elementary School in Omaha from 1949 to 1952 while Bob completed Medical School. The couple moved to Minden, NE in July of 1953 along with their dear friends Dick & Phyllis Finkner to start a medical practice. Mary Lea was a member of Minden United Methodist Church, PEO, and Rebekahs. She was very active in the church and United Methodist Women. She enjoyed playing golf, church choir, playing bridge, vegetable and flower gardening, and spending time with family and friends. She and Bob traveled extensively throughout the United States and overseas. They spent many happy weekends camping with family and friends. She loved watching sports and delighted in watching her children and grandchildren participate in numerous sports and musical activities. Mary Lea is survived by her son, Blake and wife Gail Butler of Beatrice, NE; daughters, Suzanne and husband Steve Barker of Kearney, NE; Lora Lea and husband Pat Brennan of Omaha, NE and Allyson and husband Dave Jameson of Minden, NE; 12 grandchildren and 17 Great-Grandchildren as well as a host of other relatives and friends. She was preceded in death by her parents, Husband, Dr. Robert E. Butler as well as sister-in-law and brother-in-law, Elizabeth and Sid Avant. Memorials are suggested to Minden United Methodist Church.

Mary Lea Butler, 92, of Minden, NE passed away on Sunday, December 3, 2017 at Bethany Home in Minden. Funeral services will be held at 10:30 a.m. on Friday, December 8, 2017 at the Minden United Methodist Church with the Rev. Paul Blanchard... View Obituary & Service Information

The family of Mary Lea Butler created this Life Tributes page to make it easy to share your memories.

Send flowers to the Butler family.