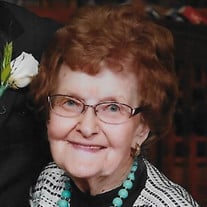 MATILDA “Til” STUEHM Kearney Resident, 93 Matilda “Til” Stuehm, 93, of Kearney, formerly of Hildreth, died April 20, 2017, at her home in Kearney. Funeral services will be held at 11:00 a.m. on Tuesday, April 25, 2017, at Trinity Lutheran Church in Hildreth, NE with the Revs. Steve and Patti Byrne officiating. Interment will be in the Hildreth Cemetery. Visitation will held from 4:00 to 6:00 p.m. on Monday, April 24, 2017 at the Jelden-Craig Funeral Home in Hildreth. Memorials are suggested to Water for Haiti, Feed My Starving Children, World Hunger or to the donor’s choice. Craig Funeral Home is in charge of arrangements. Matilda Magdalene Fritson was born December 8, 1923, to John Herman and Catherine “Katie” (Dorn) Fritson on a farm northwest of Macon, NE. She was named after her grandmother and great grandmother. She was baptized on December 26, 1923, and confirmed on April 10, 1938, at Zion Lutheran Church west of Macon. Matilda grew up in the Macon area going to School District 56 until age 8 at which time her family moved to Kansas for a year. They then moved to the Bloomington, NE, area where she attended the James School. She went to Franklin High School one semester and graduated from the Bloomington High School in 1941. She then attended Kearney State Teacher’s College for one year and taught country schools in Franklin, Kearney, and Phelps counties. Her fifth year of teaching was at the Hildreth Public Schools where she taught grades 6-8. Matilda married Harold Stuehm on February 27, 1948, at her parent’s home near Keene, NE. They had four children, David, Linda, Valerie and Nadine. They lived on a farm just north of Hildreth the first year of their married life, then moved to a farm northeast of Wilcox for 14 years and then moved to the Henry and Nellie Stuehm farm by Hildreth in 1963. They remained living there until 2002 at which time they moved to Kearney. They celebrated their 55th anniversary just prior to Harold’s death in 2003. Matilda kept very busy raising her family, helping on the farm, gardening, canning, sewing, raising chickens, milking cows and was involved with church and community activities. She was a member of Trinity Lutheran Church of Hildreth, First Lutheran Church of Kearney, a Sunday School teacher for 40 years, church circle member, the NON Club, the Double D Extension Club, a 4-H member and leader, Common Threads Quilter’s Club, enjoyed helping to make quilts for the Lutheran World Relief and hand quilting for Camp Carol Joy Holling. She especially enjoyed the Kearney YMCA swimming and exercising classes. Most of all she enjoyed time with her children, grandchildren, great grandchildren and their families. She is survived by son, David and wife, Lydia, of Wilcox, daughters, Linda Olsen and husband Victor, Valerie Erickson and husband, Alvin, and Nadine Stuehm and husband Claude Louishomme, all of Kearney; grandchildren and spouses, Trenton and Kristen Erickson, Omaha, Mary and Seth Johnson, Upland, Troy and Meagan Olsen, Santa Fe, NM, Laurel and Joey Thorell, Axtell, Nicole and Rob Evers, Minden, Christian Stuehm, Hildreth, Robert Stuehm, Hildreth, Trevor Erickson, Lincoln, Cecilee and Blake Huelsnitz, Grand Island, and Brittany Olsen, Northglenn, CO; great grandchildren, Bristol, Barrett, Marley, and McCoy Thorell, Kaleb, Kip, Kolt, and Parker Johnson, and Weston Evers; sisters Lillian Johnson and Magdalene Duering, sister-in-law, Jeannie Fritson, all of Kearney, aunt, May Dorn of Minden, and many nieces, nephews, and cousins. She was preceded in death by her parents, husband, Harold, granddaughters, Moriah Panter and Kimberly Olsen, brothers, Herman (Bud) Fritson and Harold Fritson, sister, Lavina Fritson, her parents-in-law, Henry and Nellie Stuehm, sister-in-law and husband, Helen and Dale Francisco, brothers-in-law, Edsel Johnson and Dale Duering, nephews, Michael Fritson, Bernard Fritson, James Duering, Robert Duering, and Gaylon Francisco.

The family of Matilda "Til" Stuehm created this Life Tributes page to make it easy to share your memories.

Send flowers to the Stuehm family.