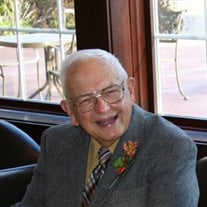 Max Lahowetz, 91 years of age passed away on Friday, September 22, 2017 at the Bethany Home in Minden, Nebraska. Funeral services will be on Wednesday, September 27, 2017 at 10:30 at the St. john’s Catholic Church in Minden with father James Benton officiating. Visitation will be at the Craig Funeral Home in Minden on Tuesday from 3-5 p.m. Rosary will be recited at the church at 7:00 Tuesday evening. Burial will be in the West Lawn Cemetery in Grand Island Wednesday afternoon at 2:15 p.m. Max was born on August 2, 1926 to the parents of Edward and Lucille Lahowetz. He was born in a house in the country 5 miles west of St Paul Nebraska. The family moved to the farm of his maternal grandparents, Mary & Joseph Komsak, when he was 5. He attended a one-room school house, and later Max attended St. Paul High School. Two weeks after graduating high school, at the age of 17, he entered the US Navy and arrived at basic training in Farragut, Idaho on June 6, 1944. After completing training as an electrician, Max spent the next two years on the Islands off of Australia, and ended his service in the Philippines. He returned to the family farm at the age of 19. Max furthered his electrical training at Milford Technical College in Milford, Nebraska. For the next 4 years Max spent his time farming, wiring houses and fishing and hunting with his friends. In 1951, Max met the love of his life, Arlene Cuzzone who was visiting relatives in Loup City. Arlene was from Chicago, Il. After only two dates they decided to be married. Arlene met her in-laws for the first time at their wedding in Chicago on October 28, 1951. They moved to an isolated farm in the hills a few miles north of Elba, Nebraska. One year later, their daughter, Patricia was born. Max and Arlene tried farming for two years but decided it wasn’t for them. They moved to Grand Island, Nebraska where Max took a job with the Grand Island School System in maintenance. Max became head of maintenance for the new Grand Island High School. In 1955 their son, James, was born. The family moved to a new home close to the high school where they remained until both children where out of the nest. Later, Max went to work for New Holland in Grand Island. He was able to use all his valuable skills until his retirement in 1988. They bought a duplex in a retirement community and left the chores of yard work and maintenance behind. During this time they enjoyed traveling and friends. Max and Arlene moved to Minden, Nebraska in 2001 to be closer to family. They built a home and lived there happily meeting new friends and being involved with their church, St Johns. Max truly lived a gifted life. He brought smiles where ever he went. He loved sharing lapel pins he would create or bread that he baked. Max could fix anything. He was a loyal and loving husband and father. He is survived by his wife of 66 years, Arlene: daughter Patricia of Kearney NE, son James (Katherine) of Gilbert, AZ, three grandchildren, Lindsay Larson, Emily Foldes and Ben Lahowetz. Three great grandchildren, James, Eliza and Cora. He was preceded in death by both parents and brother Joe Lahowetz. In lieu of flowers please send gifts to either Bethany Home or St Johns Catholic Church.

Max Lahowetz, 91 years of age passed away on Friday, September 22, 2017 at the Bethany Home in Minden, Nebraska. Funeral services will be on Wednesday, September 27, 2017 at 10:30 at the St. john&#8217;s Catholic Church in Minden with father... View Obituary & Service Information

The family of Max Lahowetz created this Life Tributes page to make it easy to share your memories.

Max Lahowetz, 91 years of age passed away on Friday, September...

Send flowers to the Lahowetz family.