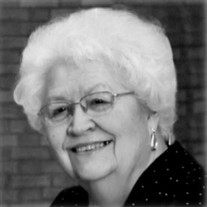 Maxine Carol (Sorensen) Christensen, 88, of Minden, died Friday, September 10, 2021, at Good Samaritan Hospital in Kearney following a stroke she had suffered two days earlier. Funeral services will be held at 4:00 p.m. on Tuesday, September 14, 2021 at Minden United Methodist Church with Rev. Peter Choi officiating. Private family interment will be held prior to services. Visitation will be held from 6:30 p.m. to 8:00 p.m. on Monday, September 13, 2021 at Craig Funeral Home in Minden. Memorials in Maxine’s honor are kindly suggested to Minden United Methodist Church or the Minden Senior Center. Craig Funeral Home is in charge of arrangements. Maxine was born March 17, 1933, to Calvin and Edna (Johnson) Sorensen at her grandmother Minnie Johnson’s home in Minden during a snowstorm. Maxine attended West Pointe Country School District 41 for 1st and 2nd grades and Snow Flake Country School District 12 for 3rd through 8th grades. She graduated from Minden High School with the Class of 1950, and worked for a medical office and at the telephone company before getting married. On August 5, 1954, Maxine married Edwin Christensen at her parents’ home southeast of Norman. Maxine and Edwin made their home on the Christensen family farm northeast of Minden for 55 years where they raised their four children: Ronald, Karen, Marcia and Linda. Maxine was involved in many aspects of farming operations. In 2009, Maxine and Edwin moved into Minden and Edwin passed away in 2010. Maxine continued to live alone in her home until the time of her death. Maxine was a life long member of the United Methodist Church. She also participated in the South Central Nebraska Genealogical Society and was a Charter Member of the Liberty Belles Friendship Club (formerly Liberty Belles Extension Club). She enjoyed playing cards with her many friends and was a 65 year member of the same Some’R’Set Club. In her later years she often frequented the Minden Senior Center and cherished the good food, friends and fun activities. Her greatest joy was spending time with her family. She cherished and loved her children and lovingly welcomed their spouses. She made a special connection with each and every one of her grandchildren and great-grandchildren. The highlight of Maxine’s life was watching her family grow. Survivors include daughters, Karen Duester and husband Gregg of Del Mar, California, Marcia Harris and husband Steve of Superior, Colorado, and Linda Burgett and husband Brian of Urbandale, Iowa; daughter-in-law, Liz Christensen of Allen, Texas; grandchildren, Patrick Christensen and wife Brooke of Allen, Texas, Tommy Christensen and wife Susanna of Plano, Texas, David Burgett and wife Kelsey of Delaware, Ohio, Katie Jo Rankin and husband Adam of Galena, Ohio, Amy Burgett of Denver, Colorado, Nicole Harris of Fort Collins, Colorado, and Michael Harris of Tulsa, Oklahoma; great-grandchildren, Avah, Nora, Asher, Ryan, Breanna, Owen and Connor; sister, Vera Jean Hubert of Kearney; sister-in-law, June Sorensen of Norman; and several nephews, nieces and friends. Special mention to nephew, Terry Sorensen and wife Jackie of Minden who lovingly supported Maxine in countless ways. She was preceded in death by her husband, Edwin; son, Ronald; granddaughter, Rachel; and brothers, Gordon and Allen. Tributes and memories can be shared with the family at www.craigfunerals.com.

The family of Maxine C. Christensen created this Life Tributes page to make it easy to share your memories.