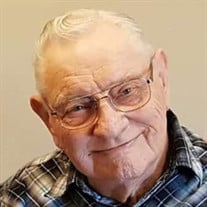 Melvin C. Reiss, 93, of Minden, passed away on Monday, May 3, 2021 at the Central Nebraska Veterans Home in Kearney. Funeral services will be held at 10:00 a.m. on Friday, May 7, 2021 at the Minden United Methodist Church with Rev. Peter Choi officiating. The service will be live streamed to the church’s YouTube channel and will be shared to the funeral home’s Facebook page following the service. Interment will be held following services at the Minden Cemetery with military honors presented by the Minden American Legion and the Heartwell Veterans of Foreign Wars in conjunction with the United States Army Military Honors Team. Visitation will be held from 3:00 to 5:00 p.m. on Thursday, May 6, 2021 at the Craig Funeral Home in Minden. Memorials in Melvin’s honor are kindly suggested to the family for later designation. Craig Funeral Home in Minden is in charge of arrangements. Melvin Carl Reiss was born February 20, 1928 on the farm North of Campbell, NE to Edward and Margaret Reiss. He was baptized and confirmed into the Westminster United Presbyterian Church of Campbell. Melvin attended the Presley Country School, graduating 8th grade at which time he went to the Kearney County Court House and took the high school equivalency test and received his certificate of graduation. Melvin went into the Army returning home with Rheumatic Fever, which kept him bedridden for nearly a year. Melvin married Faye Keedle on October 21, 1953. To this union they had three boys and one girl. Melvin farmed with his father and brother for many years. Melvin and Faye retired to Minden in 1978 to the home Melvin built with the aid of his sons. Upon retirement he worked at Coast to Coast. At this time they became active members of the United Methodist Church holding numerous positions. Melvin and Faye enjoyed traveling. They took weekend excursions to steam shows in their camper and traveled the world seeing sights. He was an inventor, creator and a collector. He would show his handmade Hot-Air engines and traded watch fobs and barbed wire among other things. Spending time with his family is what he cherished the most. Those left to cherish his memory include his children, Lymon Reiss and his wife, Connie, of Kearney, Carmen Schutte and her husband, Michael, of Kansas City, MO, Myron Reiss and his wife, Vickie, of Council Bluffs, IA, and Delwin Reiss and his wife, Karen of Wichita, KS; 7 Grandchildren; 13 Great-Grandchildren; as well as a host of extended relatives and friends. He was preceded in death by his parents, his wife, sister, Vera Plum, and brother, Earl Reiss. Tributes and memories can be shared with the family at www.craigfunerals.com.

Melvin C. Reiss, 93, of Minden, passed away on Monday, May 3, 2021 at the Central Nebraska Veterans Home in Kearney. Funeral services will be held at 10:00 a.m. on Friday, May 7, 2021 at the Minden United Methodist Church with Rev. Peter... View Obituary & Service Information

The family of Melvin C. Reiss created this Life Tributes page to make it easy to share your memories.

Send flowers to the Reiss family.