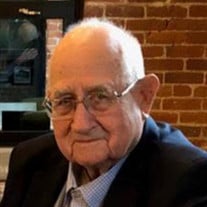 Melvin “Slim” C. Hemje, 92, of Hildreth passed away on Thursday, September 9, 2021 at Kearney Regional Medical Center. Funeral services will be held at 11:00 a.m. on Tuesday, September 14, 2021 at Trinity Lutheran Church in Hildreth with Rev. Caroline Keenan officiating. The service will be live streamed to the church’s Facebook page. Interment with military honors will be held following services at Emmanuel Lutheran Cemetery, south of Hildreth. Visitation will be held from 4:00 to 6:00 p.m. pm Monday, September 13, 2021 at Trinity Lutheran Church in Hildreth. Memorials in Slim’s honor are kindly suggested to Trinity Lutheran Church or the Hildreth Volunteer Fire Department. Craig Funeral Home is in charge of arrangements. He was born on January 30, 1929 to Carl and Minnie (Bauer) Hemje on their farm ¾ miles west of Hildreth, NE. He was baptized on March 10, 1929 at home and was confirmed in the Lutheran faith on June 13, 1943 at St. Paul Lutheran Church in Hildreth. Melvin graduated from Hildreth High School in 1946. He farmed for a number of years and worked part-time as an electrician starting in 1948 when the Rural Electric Administration (REA) came to the area wiring many homes. Melvin served his country in the Nebraska Air Guard during the Korean War and was stationed at Bangor, Maine and Cheyenne, Wyoming opening up air bases which had been closed after World War 2. He returned to Hildreth in 1952 to start his own business, Hemje Electric, which he operated for 42 years.   Hemje Electric served Hildreth and area communities doing electrical, plumbing, HVAC, and sold appliances and hardware. In 1954, he “met a beautiful girl, the love of his life, Rose”. Melvin married Rose Arlene Christensen on June 19, 1955 at Fredericksburg Lutheran Church near Minden. They celebrated their 55th wedding anniversary in 2010. They were blessed with three daughters, Jane, Judy and Nancy, eight grandchildren and 15 great-grandchildren. Melvin was a life-long member of Trinity Lutheran Church.  His many servant roles included president and trustee of the church council, member of the church building committee, and mentor to elementary and middle school students. In 1957, he joined the Hildreth Volunteer Fire Department serving 30 years as Fire Chief and was a life-time member.  He saw many changes in those years including getting the first ambulance in Hildreth, adding the EMT service in 1966, and updating equipment and training. He served the Hildreth area on the Nebraska Emergency Medical Technician team. He was always proud of the Hildreth Fire Department and the first-class department that it continues to be. Melvin was a charter and life-time member of the Lions Club serving in many roles. Some of his favorite activities included the screening for eyesight and hearing and he loved serving pancakes to the school children. Melvin was involved with the Hildreth 4th of July celebrations and organized the first Kiddie Tractor Pull in 2011. He was involved in the Hildreth Community Builder Association and served 28 years on the Hildreth Village Board. In 2013, he was awarded the Kearney Area Freedom Award for Volunteer Service. Being with his children, grandchildren and great-grandchildren was his greatest joy. He and Rose enjoyed annual campouts to Nebraska State Parks with their family and special trips with their grandchildren prior to starting Kindergarten. He never forgot a birthday, anniversary, or special moment, and always had a $2 bill ready for the mail, beef jerky in his fridge and everyone knew where the “cookie drawer” was. He had the ability to connect with you no matter your age and never once did he make you feel he didn’t have time for you. Melvin is survived by his daughters, Jane (Todd) Petersen of Minden, Judy (Tom) Dobbe of Lincoln, Nancy (Jim) Bellows of York; grandchildren, Sarah (Trent) Amstuz of Lincoln, Scott (Audrey) Dobbe of Omaha, Stephanie (Brady) Dupuis of Denver, Matt (Sunny) Bellows of St. Louis, Gretchen (Seth) McBride of Eagle, Stacey (Joel) Barjenbruch of Lincoln, Brian (Stephanie) Bellows of Lincoln, Rebecca (Alex) Finkle of Omaha; great-grandchildren, Stella and Peter Amstuz of Lincoln, Cora, Brandt, Theodore and Frederick Dobbe of Omaha,Thomas Dupuis of Denver, Vivienne and Maeve Bellows of St. Louis, Lillian and Claire McBride of Eagle, Celia and Warren Barjenbruch of Lincoln, Greyson and Indy Bellows of Lincoln; special friends, Roger and Judy Boyer of Hildreth; as well as a host of extended relatives and close friends. He was preceded in death by his wife, Rose Hemje; parents, Carl and Minnie Hemje; sister and brother-in-law, Leona and Joe Hitchcock; sisters-in-law and brothers-in-law, Lily and Dynie Jensen, Clyde and Wilma Christensen, Clifford and Johnnie Belle Christensen, Violet Christensen, Dahlia and Kenny Saltzgaber, Iris and Bernie McDonald, and Zinnia and Emmas Casper. Tributes and memories can be shared with the family at www.craigfunerals.com.

The family of Melvin "Slim" C. Hemje created this Life Tributes page to make it easy to share your memories.

Send flowers to the Hemje family.