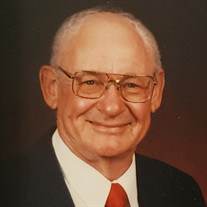 Merlyn C. Stadler, 87, of Axtell, NE passed away on Friday, July 5, 2019 at Bethany Home in Minden. Funeral services will be held at 2:00 p.m. on Friday, July 12, 2019 at the Minden Evangelical Free Church with the Rev. Tom Barnes officiating. Interment will be held following services at the Minden Cemetery. Visitation will be held from 4:00 to 6:00 p.m. on Thursday, July 11, 2019 at the Craig Funeral Home in Minden. Memorials in Merlyn’s honor are kindly suggested to the Minden Evangelical Free Church or to the Kearney County Historical Society. Craig Funeral Home is in charge of the arrangements. Merlyn was born on May 14, 1932 in Minden, to Neleigh and Alveda (Rodine) Stadler. He grew up in rural Kearney County and received his education from Minden High School. Merlyn entered the United States Army on November 5, 1952 and served state-side during the Korean War. He was honorably discharged after rising to the rank of Sargent on November 4, 1954. Merlyn was united in marriage to Caroline Keister on March 28, 1953 at Bethel Union Church in Heartwell. The couple lived in Tacoma, Washington while Merlyn was in the Army. They returned to the family farm in 1954 where he worked with his brother Leon until retiring in 1989. Merlyn was a member of the Keene Evangelical Free Church, where he served as Sunday School Treasurer and Deacon. He later became a member of the Minden Evangelical Free Church where he served on the church board, and as a Deacon, Head Usher and Head Greeter. He also served the Midwest District of Evangelical Free Churches on the finance and church development boards. Other volunteer activities included: the Keene Elevator Board, Christian Homes Care Community Board, Kearney County Historical Society and Museum Board, and Minden Main Street Board, where Merlyn was involved with the 100th Anniversary of the Kearney County Courthouse, the Fountain of Memories, the Minden Opera House restoration, and cemetery tours. Merlyn was also a member of the Minden Rotary Club and enjoyed volunteering at Pioneer Village. Those left to cherish his memory include his daughters Sylvia Asay and her husband Ted of Kearney, NE, Sheila Carlson of Denver, CO, and Cindy Renteria and husband Greg of Axtell, NE; six grandchildren, Aaron, Alex, and Austin Asay, Samantha Carlson, and Croix and Aubrie Renteria and their spouses; seven great-grandchildren; brother, Leon Stadler and his wife Val Jean of Minden, NE; as well as a host of extended relatives and friends. He was preceded in death by his parents, his wife, and one sister. Tributes of memory can be shared with the family at www.craigfunerals.com.

Merlyn C. Stadler, 87, of Axtell, NE passed away on Friday, July 5, 2019 at Bethany Home in Minden. Funeral services will be held at 2:00 p.m. on Friday, July 12, 2019 at the Minden Evangelical Free Church with the Rev. Tom Barnes officiating.... View Obituary & Service Information

The family of Merlyn C. Stadler created this Life Tributes page to make it easy to share your memories.

Send flowers to the Stadler family.