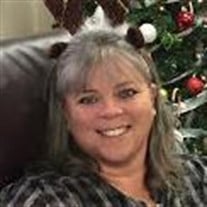 Michelle “Shelli” Anette Halsted, 45 years of age from Hildreth, NE passed away on Monday, March 27, 2017 at the CHI Good Samaritan Hospital in Kearney shortly after being admitted. Celebration of Life services will be held on Friday, March 31, 2017 at 2:00 p.m. at the Keene Evangelical Free Church in Keene with Pastor Matt Snell officiating. Burial will be prior to the service in the Hildreth Cemetery. Layton-Craig Funeral Home in Minden is in charge of arrangements. No Visitation Shelli was born September 7, 1971, along with her twin sister Patricia Lynn Reynolds Johnson, who now lives in Greeley, CO to Paul Edward and Patricia Rose (Monheiser) Reynolds in Greeley, Colorado. The twins have two older brothers Paul Dean Reynolds and wife Michele of Greeley, CO and Lawrence John Reynolds also of Greeley. Shelli graduated from Greeley Central High School in 1990. Shelli went on to Highland Hills Academy where she obtained her cosmetology license in 1991. She was joined in marriage on August 8, 1994 to Shawn Halsted. To that union were born Alexandra ‘Ali’ (April 1995), Issiah ‘Ike’ (October 1996), Skylar ‘Sky’ (April 1999). Shelli enjoyed sewing, crafting, and cake decorating. Before her passing Shelli worked as an Advocate for Families CARE in Kearney, Nebraska. She was passionate about helping and caring for those in need. Shelli was an active member of Keene Evangelical Free Church and taught Sunday School and VBS. She was also the coordinator of the Meals Ministry. She enjoyed spending time every morning in bible study and prayer. Shelli was preceded in death by her mother, Patricia and nephew, Peyton. She is survived by her husband, children, father, brothers and sister and 20 nieces and nephews.

Michelle &#8220;Shelli&#8221; Anette Halsted, 45 years of age from Hildreth, NE passed away on Monday, March 27, 2017 at the CHI Good Samaritan Hospital in Kearney shortly after being admitted. Celebration of Life services will be held on Friday,... View Obituary & Service Information

The family of Michelle "Shelli" Halsted created this Life Tributes page to make it easy to share your memories.

Send flowers to the Halsted family.