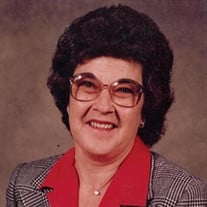 Milrae L. Petersen, 88, of Axtell, passed away on Wednesday, December 8, 2021 at her home. Funeral services will be held at 10:30 a.m. on Monday, December 13, 2021 at First Presbyterian Church in Axtell with the Rev. Logan Ellis officiating. Interment will be held following services at Pleasant Hill Cemetery in Axtell. The funeral will be live streamed to the church’s Facebook page. Visitation will be held from 3:00 to 5:00 p.m. on Sunday, December 12, 2021 at Craig Funeral Home in Minden. Memorials in Milrae’s honor are kindly suggested to the family for later designation. Craig Funeral Home in Minden is in charge of the arrangements. Milrae was born August 29, 1933 in Minden to Ray and Esther (Jensen) Favinger. She grew up and attended school in Minden, graduating from Minden High School. On June 7, 1952, she was united in marriage to Lavern R. Petersen in Minden and to this union, four children were born: Cindy, Mike, Doug and Jeff. The family made their home in Axtell where Milrae was worked as a babysitter, served as the Village Clerk of Axtell, and also worked at the Axtell Market and for the Kearney Hub. She was a member of First Presbyterian Church in Axtell. Milrae enjoyed gardening, traveling, needle point, knitting, cooking and spending time with her family while hosting gatherings. Those left to cherish her memory include her daughter, Cindy Petersen; sons, Doug Petersen and Jeff Petersen, all of Axtell; grandchildren, Mitch (Kenna) Petersen; Emalie (Jamie) Petersen, Ellie Petersen, and Reggie (Merissa) Petersen; great-grandson, Maverick Petersen; sisters, Mardell Bailey and Marsha Bjorklund; as well as a host of nieces, nephews, extended relatives, and close friends. She was preceded in death by her parents; husband, Lavern Petersen in 2006; son, Mike Petersen; sister, Ione Rammagie; and brother, Don Favinger. Tributes and memories can be shared with the family at www.craigfunerals.com.

Milrae L. Petersen, 88, of Axtell, passed away on Wednesday, December 8, 2021 at her home. Funeral services will be held at 10:30 a.m. on Monday, December 13, 2021 at First Presbyterian Church in Axtell with the Rev. Logan Ellis officiating.... View Obituary & Service Information

The family of Milrae L. Petersen created this Life Tributes page to make it easy to share your memories.