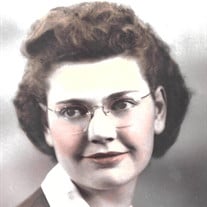 Myra M. Nelson, 96, of Minden, NE passed away on Tuesday, December 19, 2017 at Kearney County Health Services in Minden. Funeral services will be held at 10:30 a.m. on Saturday, December 23, 2017 at the Minden United Methodist Church with the Rev. Paul Blanchard officiating. Interment will follow services in the Minden Cemetery. Visitation will be held from 4:00 to 6:00 p.m. on Friday, December 22, 2017 at the Craig Funeral Home. Craig Funeral Home is in charge of the arrangements. Myra was born on March 28, 1921 in Bladen, NE to Arthur and Caroline (Zoph) Woods. She grew up in the Bladen area and Graduated from Bladen High School. She was united in marriage to Gilbert Nelson in Philipsburg, KS. The couple moved to the family farm after World War II where they lived until 1960 when they purchased her Uncles farm. In 1998 they moved to Minden. Myra was employed at the Hastings Naval Ordnance Plant. She also taught school in Kansas and Nebraska. Myra was a member of the Upland United Methodist Church, enjoyed going to garage sales with friends and relatives and teaching children’s Sunday school classes at the church in Upland. Myra loved to spend time with her grandchildren and great-grandchildren. Survivors include her husband of 71 years, Gilbert Nelson of Minden; sons, Dave Nelson of Minden and Gregg Nelson of Woodlands, TX; two grandchildren, Bradley Nelson of Centennial, CO and Lezlie Allen and her husband Lance of Littleton, CO; great-grandchildren, Jake and Ross Garrett; step-great-grandchildren, Bentley and Brodie Allen. She was preceded in death by her parents, brothers, Leo, Albert, Francis and John, and one sister, Marie. Memorials are suggested to the Minden United Methodist Church.

Myra M. Nelson, 96, of Minden, NE passed away on Tuesday, December 19, 2017 at Kearney County Health Services in Minden. Funeral services will be held at 10:30 a.m. on Saturday, December 23, 2017 at the Minden United Methodist Church with... View Obituary & Service Information

The family of Myra M. Nelson created this Life Tributes page to make it easy to share your memories.