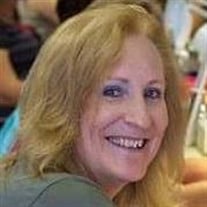 Nancy J. Jurgens, 60, of the Hildreth/Wilcox area passed away on Thursday, September 13, 2018 at CHI Health - Good Samaritan Hospital in Kearney, Nebraska. Funeral services will be held at 11:00 a.m. on Tuesday, September 18, 2018 at Trinity Lutheran Church in Hildreth with the Revs. Patti and Steve Byrne officiating. Interment will be held following services at the Hildreth Cemetery. Visitation will be held from 4:00 to 6:00 p.m. on Monday, September 17, 2018 at the Craig Funeral Home in Minden with Christian Vigil Service at 6:00 p.m. led by Fr. Joseph Hannappel. Memorials in Nancy’s honor are kindly suggested to the family for later designation. Craig Funeral Home is in charge of the arrangements. Nancy was born on April 10, 1958 in Lincoln, Nebraska to Louis and Lila Hannappel and baptized in the Roman Catholic faith. She grew up in Lincoln, Beatrice, and Fairbury, Nebraska and received her education at the University of Nebraska Kearney with a bachelor’s degree in Business Administration. She was united in marriage to Ryan Jurgens on December 5th, 1981 in Fairbury, Nebraska. After which the couple lived in Hildreth, Nebraska where she was an in-home daycare provider. She was a member of Trinity Lutheran Church in Hildreth. She enjoyed following the activities of her children and the many kids who grew up at “Nancy’s house”. She loved attending Nebraska sporting events and all the travel, fellowship, and excitement that came with it. Those left to cherish her memory include her husband, Ryan Jurgens; sons, Adam Jurgens and significant other, Lindsey Hawley and Alex Jurgens; daughter, Amber and husband, Josh Maple; grandsons, Jayden and Trey Maple and Isaiah, Eli and Selah Hawley; sister, Janet; and husband, Don Johnson; as well as a host of other relatives and friends. She was preceded in death by her parents Louis and Lila, and brother, Doug Hannappel. Tributes of memory can be shared with the family at www.craigfunerals.com.

The family of Nancy J. Jurgens created this Life Tributes page to make it easy to share your memories.

Nancy J. Jurgens, 60, of the Hildreth/Wilcox area passed away...