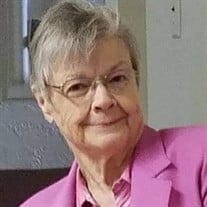 Norma L. Santistevan, 82, of Minden, passed away on Tuesday, May 18, 2021 at CHI Health – St. Elizabeth Hospital in Lincoln. Memorial services will be held on Saturday, May 29, 2021 at 11:00 a.m. at the Craig Funeral Home in Minden with the Rev. Ruth Rosenzweig officiating. Private family inurnment will be held later at the Minden Cemetery. There will be no visitation as the family has honored Norma’s wish to be cremated. Memorials in Norma’s honor are kindly suggested to the family for later designation. Craig Funeral Home is in charge of arrangements. Norma Lee Santistevan was born on March 14, 1939 in Cedar Rapids, IA to Lewis and Francis (Rogers) Rusk. She grew up and attended school in the Cedar Rapids area. In November of 1992 she was united in marriage to Albert A. Santistevan. The family made their home in Craig, CO, where she owned and operated Norma’s Tips To Toes Nail Salon for many years. They later moved to Minden in 2007. She was a member of the Lighthouse Church in Kearney. Norma enjoyed sewing, photography, scrapbooking, crafting, and genealogy. She loved to travel and spend time with her family. Those left to cherish her memory include: her husband, Albert of Minden; sons, Jerry Bell of Central City, Tracy (JoAnna) Santistevan of Craig, CO, Maurice (Bert) Santistevan of Rocky Ford, CO; Carlos Santistevan of Rocky Ford, CO; Greg Santistevan of Rocky Ford, CO, and Jon Santistevan of Fort Morgan, CO; daughters, DeAnna (Rick) Elsberry of Marshalltown, IA; Sally (Sam) Baca of Rocky Ford, CO, and Laurel Cordova of Pueblo, CO; daughter-in-law, Berta Bell of Oelwein, IA; 17 grandchildren; many great-grandchildren, and several great-great-grandchildren; brother, David (Mary) Rusk of Cedar Rapids, IA; as well as several extended relatives and friends. She was preceded in death by: her parents; sons, James Bell, and Jeff Santistevan; brothers, Jack Rusk, and Paul Rusk; sisters, Betty Bewley, Martha Sisco, and Ruth Chapman. Tributes and memories can be shared with the family at www.craigfunerals.com.

The family of Norma L. Santistevan created this Life Tributes page to make it easy to share your memories.

Send flowers to the Santistevan family.