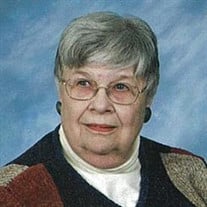 Patricia Jean (Brady) Christensen, 87, died September 28, 2017 at Bethany Home in Minden. Pat lived in her own home until her 87th birthday, when a heart attack and failing health necessitated a move to skilled nursing. Celebration of Life services will be on Monday, October 2, 2017 at 11:00 a.m. at the Bethany Lutheran Church in Minden with Reverend Donald Hunzeker officiating. Visitation will be at the Craig Funeral Home in Minden on Sunday from 3-5 p.m. Burial will be prior to the celebration service at the Minden Cemetery. She leaves behind to mourn her passing: Catherine Patton of Schroon Lake, NY Colleen Christensen (Steve Adams) of rural Otoe, NE Carole (Al) Gnuse of Lincoln, NE Steven (Suzann) Christensen of Kearney, NE Kevin (Nancy) Christensen of Minden, NE David (Maggie) Christensen of Omaha, NE. Grandchildren: 7 Great-grandchildren: 10 Pat was preceded in death by her parents, husband Dale (2003) and daughter Carin (2012). Born on September 1, 1930 to Duer Somes and Gertrude Merle (Devenney) Brady, Pat spent her childhood in Franklin and Tecumseh. Duer Brady enlisted in the navy in 1941, and Pat and her mother lived three years on a California military base. Following the war, the Bradys moved to Minden, NE, where Pat graduated in 1948. Pat excelled in trumpet, and took private lessons at Hastings College during high school. Her college career was put on hold as she married Dale Eugene Christensen on August 27, 1949. To this couple, seven children were born: Catherine, Carin, Colleen, Carole, Steven, Kevin, and David. The Christensens were lifelong farmers in the Minden area. Pat wore many hats: wife, mother, mother-in-law, grandmother, great-grandmother, and friend. She was actively involved in Bethany Lutheran Church where she served as choir director for years, as well as many Minden civic organizations. Pat was a longtime member of P.E.O., Garden Club, and the Jensen Memorial Library Board. An avid reader, Pat also loved to play golf and belonged to several bridge clubs. She enjoyed watching television. Friends knew not to bother her at 10:00 a.m. each morning as she watched “The Price Is Right”. (She taped it, just in case someone interrupted her.) She was a vocal Husker fan and often expressed her feelings to those brave enough to watch games with her. It takes skill to write poetry, and that came easily to Pat. She wrote a monthly poem for the Bethany Home Banner newsletter for twenty years. Poems also were produced for memorable occasions. If you were the recipient of a Pat Poem, you truly felt special. Pat made the best potato salad ever. Some of Pat’s favorite times were sitting on her front porch or at her kitchen table, surrounded by family. Memorial donations are suggested to Bethany Lutheran Church.

Patricia Jean (Brady) Christensen, 87, died September 28, 2017 at Bethany Home in Minden. Pat lived in her own home until her 87th birthday, when a heart attack and failing health necessitated a move to skilled nursing. Celebration of Life... View Obituary & Service Information

The family of Patricia Jean Christensen created this Life Tributes page to make it easy to share your memories.