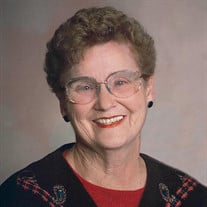 Patricia Ann (Ryan) Bergstrom, 88, of Axtell, passed away on Sunday, April 25, 2021 at her home in Axtell. Funeral Mass will be held at 10:30 a.m. on Monday, May 3, 2021 at St. John’s Catholic Church in Minden with Fr. Julius Tvrdy and Fr. Thomas Lux officiating. The service will be live streamed to the funeral home's Facebook page. Interment will be held following services at the Pleasant Hill Cemetery in Axtell. Visitation will be held from 4:00 to 6:00 p.m. on Sunday, May 2, 2021 at St. John’s Catholic Church in Minden with a Rosary service at 6:00 p.m. Memorials in Patty’s honor are kindly suggested to St. John’s Catholic Church in Minden. Craig Funeral Home is in charge of the arrangements. Patricia was born on October 8, 1932, in Minden, Nebraska to Vernon W. and Grace E. (Roads) Ryan. She grew up and attended school in Axtell and later continued her education at Kearney State College. She was united in marriage to Ronald Paul Bergstrom on November 28, 1953 in Minden, and to this union, three children were born: Mike, Cindy, and Kelli. The family made their home in Axtell where Patty was employed for many years at the Axtell Community School. She was a member of St. John’s Catholic Church in Minden, as well as the Women’s Auxiliary of the V.F.W. and was selected as the “Axtell Citizen of the Year”. Patty loved watching the finches on her back patio, gardening, baking and decorating for Christmas – especially her Snow Village! No matter what the situation, Patty always had a smile. She was a hard worker and understood the farming life – as difficult as that sometimes was. She gave her heart and soul to the Axtell Community School for over 43 years and could be found there on game nights selling tickets too! She loved all the kids who went to school there during her time and cared about them like they were her own. She will miss all of you! Those left to cherish her memory include her husband, Ronald P. Bergstrom of Axtell; son, Mike Bergstrom and wife, Janet of Axtell; daughter, Kelli Jorgensen and husband, Ron of Omaha; grandchildren, Angela (Zac) Carlson, Ashley (Mike) Clark, Ryan (Morgan) Bergstrom, Mitch Jorgensen, and Cassidy Jorgensen; great-grandchildren, Kenzo, Cooper, and Caden Carlson, and Ledger Bergstrom; as well as a host of extended relatives and close friends. She was preceded in death by her parents, Bill and Grace Ryan; and daughter, Cindy Simmons. Tributes and memories can be shared with the family at www.craigfunerals.com.

The family of Patricia "Patty" A. Bergstrom created this Life Tributes page to make it easy to share your memories.

Send flowers to the Bergstrom family.