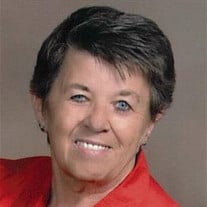 Patricia E. Peterson-Dorn, 76, of Minden, passed away on Saturday, May 19, 2018 at Premiere Estates in Kenesaw. Funeral Services will be held at 2:30 p.m. on Thursday, May 24, 2018 at St. Paul Lutheran Church in Minden with the Reverend Christopher Hazzard officiating. Interment will be held following services in the Minden Cemetery. Visitation will be held from 5:00 to 7:00 p.m. on Wednesday, May 23, 2018 at the Craig Funeral Home in Minden. Memorials are suggested to the family for later designation. Pat was born on July 11, 1941 in Little Rock, Illinois to George J Deterding and Erma E. Plambeck. She grew up in Yorkville, Illinois and rural Adams County in Nebraska. She graduated with the class of 1959 from Holstein High School. She married Edward R. Peterson in Minden on May 4, 1963. They later divorced. Together they had three daughters, Deanna, Pamela and Carmen. On July 28, 2001, Pat married Paul Dorn in Minden. Pat enjoyed helping on the Peterson family farm in her younger years and helped her daughters with 4-H projects through their many years in 4-H. She loved attending the Kearney County Fair and the Nebraska State Fair and watching her daughters show cattle. Pat raised a very large garden every year with her dad and carried on that tradition with her own large garden and flower beds at her home in Minden. Pat was an Elvis Fan, an avid watcher of Nebraska Volleyball, and enjoyed attending craft shows and local auctions. Pat was a bus driver for Minden Public Schools for 26 years. Every child on her bus route became her “kid”. She followed her “kids” through high school and graduation and has great memories of each one of them. Pat was a member of St. Paul Lutheran Church and served with the LWML and volunteered at Vacation Bible School for many years. She also assisted with Meals-On-Wheels for many years. Pat enjoyed humor and was always quick with a joke. Pat is survived by her husband, Paul Dorn of Minden; daughters, Deanna (Rob) Adams of Fort Collins, CO, Pamela Peterson of Lincoln, NE and Carmen (Joshua) Gimeson of Orlando, FL; step-daughter, Jackie (Mike) Sanne of Clearwater, NE; grandchildren, Tyler Adams, Sheyll Adams, Rebecca Peterson, Tristen Sanne, and Taylor Sanne; brother, Wayne (Karen) Deterding of Kearney, NE and sister, Barbara (Robert) Frazier of Lincoln, NE; brothers and sisters-in-law, Dennis and Sarah, Merle and Kathy, and Wendell and Debbie Dorn all of Franklin, as well as numerous nieces, nephews, and cousins. Pat is preceded in death by her parents George and Erma Deterding and her mother-in-law, Dora Dorn. Tributes of memory can be shared with the family at craigfunerals.com Craig Funeral Home is in charge of the arrangements.

Patricia E. Peterson-Dorn, 76, of Minden, passed away on Saturday, May 19, 2018 at Premiere Estates in Kenesaw. Funeral Services will be held at 2:30 p.m. on Thursday, May 24, 2018 at St. Paul Lutheran Church in Minden with the Reverend... View Obituary & Service Information

The family of Patricia E. Peterson-Dorn created this Life Tributes page to make it easy to share your memories.

Patricia E. Peterson-Dorn, 76, of Minden, passed away on Saturday,...

Send flowers to the Peterson-Dorn family.