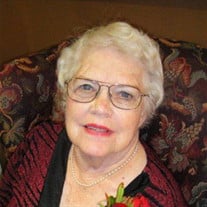 Patricia Ann Soundy died Monday May 8, 2017 at age 92, in Good Samaritan Society in Grand Island, Nebraska. A native of Farnam, during her adult life Pat also lived in Cozad and Lexington, raising a large happy family of six children with husband Art Soundy. The couple retired to Art’s hometown of Minden for several years. Pat was born August 20, 1924 in Farnam, Nebraska, the first of John and Margarette (Parker) Rowland’s three children. After graduation from high school in 1941, Pat completed her Junior Normal School training, then taught country school near Farnam and worked summers in the Farnam Bank. In 1942, she married her high school sweetheart Clinton Wear. From this union was born a daughter, Pamela. A few days before the end of the Pacific War Clinton, a pilot, was lost at sea. In the fall of 1946, Pat earned her teaching certificate at Kearney State College in 1947 and returned home to teach elementary school for the next two years. In 1949, she married the new Farnam High School Teacher and coach, Arthur D. Soundy. The couple lived in Farnam and had four more children (twins Steven and Susan; Ann and Arthur John.) They moved to Cozad to continue Art's career and Timothy was born. In 1960, Arthur was hired as principal of Lexington’s Pershing Elementary School, where he remained until his retirement in 1985. Pat was active and deeply involved in community work: especially at Lexington First Presbyterian Church, where she served as Deacon (visitation to shut-ins and the elderly); Elder; Sunday School Teacher and instructor of the Bethel Bible Series. She served regularly as a poll worker, tutored Each One Teach One students and was a dedicated hospice volunteer for a full decade. As a blood donor, she earned her 6-gallon pin. Once Pat made contact with a person in need of help, comfort or companionship, she remained committed to that person, often long after her official role had ended. Pat followed the example of her Lord Jesus Christ, with her lively interest in people and her compassion. Her warm and ready smile reflected her enjoyment of people in her community and the many rewarding relationships she formed in her life. Pat is greatly missed by her six children: Pamela Wear Palmer (Jim) of Lincoln, Steve Soundy (Linda) of Minden, Susan Williams (Roger) of Nora, Ann Atkins (Jerry) Grand Island, AJ Soundy (Cathleen) of Hopewell, NJ, and Timothy Soundy (Lisa) of Sioux Falls, SD. She is survived by eighteen grandchildren: Jamie Palmer, Shannon Palmer, Amanda Palmer, Travis Soundy, Tucker Soundy, Taylor Soundy, Tyler Williams, Lance Williams, Sarah Williams Eubank, Marnie Atkins Benson, Jeremy Atkins, Heather Atkins Fucile, Seth Atkins, Patrick Soundy, Jared Soundy, Alexander Soundy, Laura Soundy, and Matthew Soundy: eighteen great-grandchildren; and her younger brother, John P. Rowland (Ardy) of Discovery Bay, CA and brother in-law, Alan Thompson of Olympia, WA. She is preceded in death by both husbands, and sister Barbara Thompson.  Deceased's funeral arrangements Pat Soundy’s funeral service will be conducted Monday, May 15, 2017 in the Westminster United Presbyterian Church in Minden at 2 pm. Burial will be in the Minden Cemetery. There will be a visitation from 6-8 pm Sunday evening at the Layton-Craig Funeral Home.

The family of Patricia Ann Soundy created this Life Tributes page to make it easy to share your memories.

Send flowers to the Soundy family.