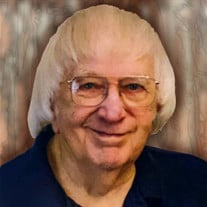 Acclaimed music educator, artist, colleague and friend, Phil Fahrlander passed away from this earth January 15, 2020 at his home in Minden. Very much a modern day Renaissance man, he was an advocate and creator of the arts, passionate for everything from film to literature, not to mention his love for teaching music. Born December 20, 1934 in Brule, Nebraska to Ray and Freda Fahrlander, Phil Fahrlander was one of five children and the only son. Graduating from Nebraska City High School in 1953, he went on to receive his Bachelors and Masters degrees from Peru State College and Kearney State College. Phil was united in marriage to Nadine Adcock on July 26, 1959 in Peru, Nebraska. After 38 years of public school teaching, he retired in 1997, where he spent his retirement with the three things he loved most in life, his wife, his art, and his antique cars. A majority of his teaching career was spent in Minden, where he was responsible for building one of the outstanding band programs in the state at the time. He also taught music in Diller and North Loup Scotia before moving to Minden. Affectionately called “Mr. F” or even “Dad” by his students, Phil was a strong advocate for his students and was proud to be their band director. In addition to teaching Band, Phil Fahrlander also taught English, Humanities, Music Theory, and was in charge of the high school gifted program. Phil Fahrlander’s family at the time of passing is his wife Nadine, sons Eric and Jeff, daughters-in-law Julie and Lisa, grandchildren Stephan, Rae, Emma, Jacob, Olivia, and Hannah, great grandchildren Henry, Stella, Clementine, and Adalynn. He is survived by his sister Rebecca and preceded in death by his parents Ray and Freda, and sisters Elinor, Marcy, and Judy. Funeral services will be held at the United Methodist Church in Minden on Sunday, January 19, 2020, at 3pm. Memorial book signing will be from 4:00 to 6:00 p.m. on Saturday, January 18, 2020 at the Craig Funeral Home at 336 N. Nebraska in Minden. In lieu of flowers, the family requests donations to be made to establish a scholarship for MHS students planning to major in music education. Interment of cremains will be at a later date. Tributes of memory can be shared with the family at www.craigfunerals.com.

Acclaimed music educator, artist, colleague and friend, Phil Fahrlander passed away from this earth January 15, 2020 at his home in Minden. Very much a modern day Renaissance man, he was an advocate and creator of the arts, passionate for... View Obituary & Service Information

The family of Phil R. Fahrlander created this Life Tributes page to make it easy to share your memories.

Send flowers to the Fahrlander family.