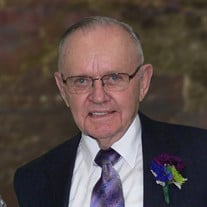 Philip Wayne Anderbery, 88 years of age from Minden, formerly of Kearney and Axtell died on Friday, July 22, 2016 at the Bethany Home in Minden. Funeral services will be on Wednesday, July 27, 2016 at the Bethany Lutheran Church south of Axtell at 10:30 a.m. with Rev. David Evenson officiating. Burial will be in the church cemetery. Visitation will be at the Layton-Craig Funeral Home in Minden on Tuesday from 5-7 p.m. Memorials are suggested to the church or Asceracare Hospice. Phil was born on May 20, 1928 on the family farm northeast of Axtell to Harold and Helen (Berger) Anderbery. He grew up in the Axtell area and graduated from Axtell High School. Phil was the valedictorian of his class. On October 2, 1946 he entered the U.S. Army. Phil served in Okinawa and was discharged on March 20, 1948. On October 14, 1951 he married Marilyn Muller. They lived and farmed near Axtell. He also raised livestock. They retired and moved to Kearney in 1992 and in 2013 they moved to Bethany Home in Minden. They enjoyed traveling and they went to GermanyAlaska, Canada, Mexico and China. They also wintered in Canyon Lake, Texas for many years., . Phil was very community minded and had served on many boards in the area. He had served as vice president of the County Farm Bureau board, Mirage Township board, the Nebraska Association of County Officials, lifelong member of the Axtell VFW, Kearney Kiwanis, Axtell Rural Fire board, the Kearney County Board of Supervisors for 12 years, Co-op Board and Axtell School board for 12 years and the Axtell Lions Club. . Phil was a lifelong member of the Bethany Lutheran Church south of Axtell and had taught Sunday school there for many years. Survivors include his wife, Marilyn of Minden; four sons, Bruce of Axtell, Wayne of Axtell, Lee and wife, Janet of Lincoln and Dale and wife, Susan of Findlay, Ohio; daughter, Jan Rapp and husband, Byron of Wadestown, West Virginia; 12 grandchildren; eight great grandchildren; brother, Richard Anderbery and wife, Eileen of Axtell. He is preceded in death by his parents and sister, Marilyn Foat.

The family of Philip Wayne Anderbery created this Life Tributes page to make it easy to share your memories.

Send flowers to the Anderbery family.