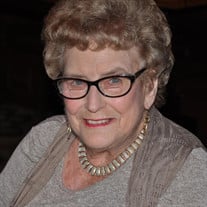 Phyllis J. Finkner, 94, of Kearney, formerly of Minden, passed away on Saturday, December 11, 2021 at the Central Nebraska Veteran’s Home in Kearney. Funeral services will be held at 2:00 p.m. on Wednesday, December 15, 2021 at the Minden United Methodist Church (340 N Newell Ave, Minden, NE) with Rev. Peter Choi officiating. The service will be live streamed to the church’s YouTube and Facebook page. Interment will be held following services at the Minden Cemetery. Visitation will be held from 5:00 to 7:00 p.m. on Tuesday, December 14, 2021 at Craig Funeral Home in Minden. Memorials are kindly suggested to the Fellowship of Christian Athletes, Minden United Methodist Church, or to a charity of the donor’s choice. Craig Funeral Home in Minden is in charge of the arrangements. Phyllis Jeanne (Hefti) Finkner was born on January 31, 1927, to Robert J. Hefti Sr. and Ethel A. “Allie" (Young) Hefti in Adams, Nebraska, the youngest of five children. Her oldest brother was nearly 26 years old when Phyllis was born. She attended school in Adams and graduated from Adams High School in 1944. Following high school graduation, she taught in one-room schools in the Adams area, including two years at the Lenora Country School and two years at the Pleasant Plain School. During that time, she also attended classes at the University of Nebraska. On June 4, 1948, Phyllis married her high school sweetheart, John Richard “Dick” Finkner, at the Methodist Church in Adams. Following their marriage, Dick entered the University of Nebraska Medical School in Omaha while Phyllis taught for one year at Omaha’s District 66 in a one-room school near Boys Town. When their first child, John Michael “Mike”, was born, Phyllis took a year off from teaching and then returned to a two-room school on L Street in Omaha. After Dick completed medical school, they moved to Minden, Nebraska in 1953 with their life-long friends, Bob and Mary Lea Butler, to start a medical practice. After their move to Minden, three additional children joined their family: ZoAnne, Matthew, and Sara. Phyllis was a member of the Minden United Methodist Church where she was active in United Methodist Women and the choir. She also led a Bible study group and participated in PEO, Eastern Star, Rebekahs, Sweet Adelines, flower and garden club, bridge club, and birthday club. She appreciated music, playing the violin and piano, and loved the challenge of crossword puzzles. Phyllis and Dick enjoyed traveling with the Butlers, spending winters at South Padre Island, camping, or spending weekends at their cabin on the Harlan County Lake, fishing, and being on the boat. Phyllis was an avid follower of Minden Whippets and Nebraska Cornhusker sports and loved attending the activities of her children and grandchildren. She also cherished the company of their family and many friends. In 2017, Phyllis and Dick moved to a retirement community in Kearney and subsequently to the Central Nebraska Veterans Home. Phyllis died on December 11, 2021, at the Central Nebraska Veteran’ Home in Kearney, Nebraska attaining the age of 94. Phyllis is survived by her husband of 73 years and her children: Mike (Kathy) Finkner of Kearney, Nebraska; ZoAnne (Dennis) Kunnemann of Imperial Nebraska; Matthew (Ann) Finkner of Lincoln, Nebraska; and Sara (Dennis) Mann of Lincoln, Nebraska. She is also survived by 13 grandchildren and their spouses and 38 great grandchildren with three more on the way. Additional survivors include her sisters-in-law Marlene Veerhusen of Adams, Nebraska and Sharon Walker of Branson, Missouri as well as nieces and nephews. Phyllis’s parents died when she was very young - her father when she was 13 and her mother when she was 17. Also preceding her in death were her siblings and their spouses including Howitt (Hazel), Robert Jr., Ruth (Clarence) Gottula, and Paul (Lorraine) along with sister-in-law and brothers-in-law Mary Lea and Orville Weber, Cliff Veerhusen, and Kenneth Walker. Tributes and memories can be shared with the family at www.craigfunerals.com.

The family of Phyllis J. Finkner created this Life Tributes page to make it easy to share your memories.

Send flowers to the Finkner family.