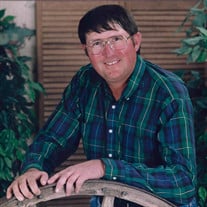 Reuben M. Kersenbrock, 63, of Hildreth, passed away on Sunday, August 8, 2021 at Bethany Home in Minden. Funeral services will be held at 10:30 a.m. on Friday, August 13, 2021 at Trinity Lutheran Church in Hildreth with the Rev. Caroline Keenan officiating. Interment will be held following services at the Hildreth Cemetery. The service will be live streamed to the church’s Facebook page. Visitation will be held from 4:00 to 6:00 p.m. on Thursday, August 12, 2021 at the Craig Funeral Home – Jelden Chapel in Hildreth. Memorials in Reuben’s honor are kindly suggested to AseraCare Hospice. Craig Funeral Home is in charge of the arrangements. Reuben was born on February 21, 1958 in Franklin to Myron and Lorrena (Bunger) Kersenbrock. He grew up in Hildreth and graduated from Hildreth High School with the class of 1977. He made his home in Hildreth where he farmed with his father. He also worked for the Franklin County Roads Department until Myron’s retirement, after which Reuben worked for Black Farms until his health condition required him to retire. He was also a talented blade sharpener for many years. Reuben was a member of Trinity Lutheran Church in Hildreth, and served on the Hildreth Cemetery Board along with the Salem Township Board. Those left to cherish his memory include his mother, Lorrena Kersenbrock of Hildreth; sisters, Lisa Nerud and husband, Randy of Lincoln, and Lori Hodson and husband, Jeff of Hastings; sister-in-law, Bobette Kersenbrock of Minden; nieces Jade Hodson (Sam) Siegel of Hershey, Jalynda (Andrew) Hollister of Hastings, Libbie Nerud of Lincoln and nephews Christian Hodson of Kearney, Seth, Cade and Levi Nerud of Lincoln; great nephews Rexford, Redmond and Rockwell Siegel of Hershey and Judd Hollister of Hastings and great nieces Scarlett and Sophia Hollister of Hastings as well as a host of extended relatives and close friends. He was preceded in death by his father, Myron Kersenbrock, brother, Nile Kersenbrock, Grandparents John and Grace Kersenbrock and Martha and Ocke Bunger. Tributes and memories can be shared with the family at www.craigfunerals.com.

Reuben M. Kersenbrock, 63, of Hildreth, passed away on Sunday, August 8, 2021 at Bethany Home in Minden. Funeral services will be held at 10:30 a.m. on Friday, August 13, 2021 at Trinity Lutheran Church in Hildreth with the Rev. Caroline... View Obituary & Service Information

The family of Reuben M. Kersenbrock created this Life Tributes page to make it easy to share your memories.

Reuben M. Kersenbrock, 63, of Hildreth, passed away on Sunday,...

Send flowers to the Kersenbrock family.