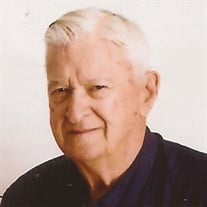 Richard E. Burritt, 80, of Upland, passed away on Tuesday, November 13, 2018 at his home. Celebration of life services will be held at 11:00 a.m. on Saturday, November 17, 2018 at Craig Funeral Home in Minden with the Rev. Craig Zachariasen officiating. A lunch will follow at “The Mall” on the square in Minden at 338 East 5th Street. There will be no visitation as the family is honoring Dick’s wish to be cremated. Private family burial will take place at a later date. Memorials in Dick’s honor are kindly suggested to the family for later designation. Craig Funeral Home is in charge of the arrangements. Richard was born on December 14, 1937 in Shelby, Nebraska to Earl and Monetha (Wilson) Burritt. He graduated from Osceola High School with the class of 1956. He was united in marriage to Sandra DeNeve on June 16, 1960 in Marengo, Iowa. They lived in Wyoming and Iowa before moving to Nebraska in 1961.While living in Minden, Dick worked for the city of Minden, and was a member of the Minden Volunteer Fire Department. They moved to a small acreage near Upland in 1981. He loved living there. Survivors include his wife, Sandra of Upland; son, Richard D. Burritt and special friend Carol Homick of Raleigh NC; daughters, Cindy (Larry) Lantis of Upland, Kris (James) Gillespie of Minden, Della Burritt and special friend Richard Johnson of Minden, Susan (Troy) Unzicker of Alliance; grandchildren, Rachelle (Chris) Blocher of Kearney, Steven (Abby) Lantis of Lincoln, Tyler Lantis of Minden, Devon (Joe) Kenton of Holdrege, Brianna (Andrew) Litzel of Sundance, WY, Tabitha Unzicker of Alliance; 10 great-grandchildren; sister, Marcia (Richard) Alt of Columbus; brother, Daniel (Glenda) Burritt of Grand Island; as well as a host of other relatives and friends. He was preceded in death by his brother William and his parents. Tributes of memory can be shared with the family at www.craigfunerals.com

Richard E. Burritt, 80, of Upland, passed away on Tuesday, November 13, 2018 at his home. Celebration of life services will be held at 11:00 a.m. on Saturday, November 17, 2018 at Craig Funeral Home in Minden with the Rev. Craig Zachariasen... View Obituary & Service Information

The family of Richard E. Burritt created this Life Tributes page to make it easy to share your memories.

Richard E. Burritt, 80, of Upland, passed away on Tuesday, November...

Send flowers to the Burritt family.