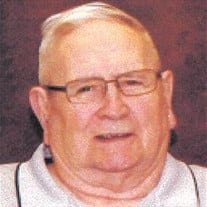 Richard “Dick” Judson Remington, 88, of Minden passed away on Monday, November 27, 2017 at Kearney County Health Services. Celebration of life services will be held at 2:00 p.m. on Saturday, December 9, 2017 at the Westminster United Presbyterian Church in Minden with the Rev. Daniel Davis officiating. Masonic rites and military honors will be presented following the services at the church. Private family inurnment will be held at a later date at the Memorial Park Cemetery in McCook, NE. There will be no visitation as the family is honoring Dick’s wishes to be cremated. Craig Funeral Home is in charge of the arrangements. Dick was born on December 12, 1928 in Danbury, NE to Walter and Margaret (Williams) Remington. He attended school in Danbury and graduated with the Danbury High School class of 1946. He furthered his education at McCook Community College, graduating from there in 1948. On January 21, 1953 he was united in marriage to Vera Marie Lewis in Wauneta, NE and to this union, two children born: Gloria and David. The family made their home around the Danbury area where Dick was involved in farming, before moving to McCook in 1961. Dick honorably served his country in the U.S. Army during the Korean conflict. Dick was also an English teacher for many years at the McCook Junior College. He was later employed in the Men’s Clothing department for Wal-Mart before retiring in 2004. Vera passed away on October 28, 2003. Dick moved to Minden in 2004 to be with Jon and Gloria before moving to Long Term Care where he enjoyed time spent with residents and staff. He was also a member of the Long Term Care Golden Angels band. Dick was a 60 year member of the Danbury Masonic Lodge #180 and the McCook Masonic Lodge #135 A.F.&A.M. as well as the Danbury American Legion. Dick thoroughly enjoyed spending time with his family and his grandchildren and being outdoors. He was also known for his keen ability to recite Shakespeare and other literary works at a moment’s notice. Those left to cherish his memory are his daughter, Gloria Becker and husband Jon of Minden; son, David Remington of Tecumseh; grandchildren, Ashley Wood, Michael and Mathew Becker, as well as a host of nieces, nephews, other relatives and friends. Dick was preceded in death by his parents, his wife of 50 years, Vera and one brother Adrian Remington. A memorial has been established in Dick's memory and is kindly suggested to the American Alzheimer's Association for research.

The family of Richard "Dick" J. Remington created this Life Tributes page to make it easy to share your memories.

Richard “Dick” Judson Remington, 88, of Minden passed away on...

Send flowers to the Remington family.