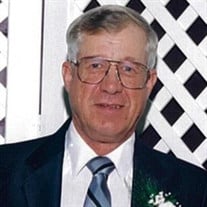 Richard “Dick” Lynn Swartz, 77, of Minden, passed away on Friday, July 17, 2020 at the Nebraska Heart Institute in Lincoln. Funeral services will be held at 11:00 a.m. on Friday, July 24, 2020 at the Minden United Methodist Church with the Rev. Peter Choi officiating. Current health recommendations for faith based services will be followed, and the use of a face mask is encouraged. Private family interment will be held prior to services at the Minden Cemetery. Visitation will be held from 2:00 to 6:00 p.m. on Thursday, July 23, 2020 at the Craig Funeral Home in Minden. Memorials in Dick’s honor are kindly suggested to the Minden Senior Center or the Minden United Methodist Church. Craig Funeral Home is in charge of arrangements. Richard was born on February 3, 1943 in Campbell, to Einer and Elsa (Lampman) Swartz. He was the eldest of five children. He was confirmed into the Trinity Lutheran Church in Axtell in 1957, and graduated from Axtell High School in 1961. On March 15, 1964, he was united in marriage to Sherryl Ann Space. This union was blessed with two children: Jodi Lynn and Michael Ray. Richard worked at the Axtell Lumber Yard, Gambles Store in Kearney, Minden Post Office and later found his love in farming. He served on the Nebraska Soybean Board, where he traveled to many different countries. He also served on the Farmers Union Board. He followed in his father’s footsteps and sold Archer Petroleum Products for many years, as well as Producer Hybrids. Richard loved to fish, go to auctions, spend time with his children and grandchildren, and listen to his son, Mike’s fishing stories. He also enjoyed his coffee with his “coffee gangs” and eating lunch at the Senior Center. When asked, he was always “wonderful”. Those left to cherish his memory include: his daughter, Jodi Swartz of Minden; son, Michael (Karen) Swartz of Minden; grandchildren, Chasity (Tyler) Anderson of Axtell, Shaylea Swartz of Minden, Zachary Swartz of Wilcox, Abbie Sanders of Lincoln; great-grandchildren, Lexie and Kason Anderson; sisters, Joyce Pelle of Aurora, CO, Pauline (Kenny) Norgaard of Minden; brothers, Gary Swartz of Arlington, TX, Paul (Gwen) Swartz of Minden; brothers-in-law, Donny (Sandy) Space of Minden, Gayle Space of Imperial, Royce (Carolyn) Space of Denton, TX; sister-in-law, Roma Anderson of Minden, as well as a host of many nieces and nephews. He was preceded in death by his parents; wife, Sherryl in 2018; sister-in-law, Pat Swartz, and brother-in-law, Mike Pelle. Tributes and memories can be shared with the family at www.craigfunerals.com.

The family of Richard "Dick" L. Swartz created this Life Tributes page to make it easy to share your memories.

Send flowers to the Swartz family.