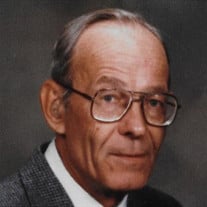 Richard (Dick) Holmes, 88, of Minden, NE passed away Tuesday, May 2, 2017 at Bethany Home in Minden. Funeral services will be Saturday, May 6, 2017 at 10:30 a.m. at St. John’s Catholic Church in Minden with Father James Benton officiating. Burial will follow at the Minden Cemetery with Military Rites provided by the Minden American Legion and the Heartwell VFW. Visitation will be at Craig Funeral Home Friday from 3-5 p.m. Rosary will be recited Friday evening at 7:00 p.m. at the church. Richard Alvin Holmes, son of Charles Bernard and Viola (Johnson) Holmes, was born November 30, 1928 in Albion, Nebraska. He was named for his two grandfathers. Dick attended schools in Lincoln, Kansas City, and Denver. He achieved the rank of Eagle Scout and was an avid baseball player. Dick graduated from Albion High School in 1946 and attended Colorado State University and Wayne State College. He enlisted in the United States Navy on October 23, 1950 and served his country during the Korean War as an aviation electronic technician. He was honorably discharged on August 18, 1954. He then completed his education, graduating from the University of South Dakota. On September 4, 1956 Richard was united in marriage to Donna Ruth Seda at St. Michael’s Catholic Church in Albion. They were blessed with two children, Karla and Charles. They made their home in Albion where he was a partner in the Holmes Equipment Company selling farm machinery and automobiles. In 1972 Dick and Donna opened the Gambles store in Minden, Nebraska. Dick enjoyed traveling, playing cards, golfing, collecting coins, and playing cribbage. He will be remembered for his humor and wit, his joy in flying kites with his grandchildren, his commentary while playing cards, and his love of family. Dick is survived by his wife Donna of Minden; two children: Karla Paulsen and husband Marshall of Minden; Chuck Holmes and wife Robin of Columbus; three grandchildren: Lani Jensen (Adam), Michael Paulsen; Justin Holmes; two step-grandchildren: Kenneth German (Mikala); Brandi Taylor (Ethan); five great-grandchildren: Seth, Adelyn, and Zane Jensen; Paxton Taylor; Jack German; two sisters: Jean Ward of Greeley, Colorado; Judy O’Dell of Laguna Beach, California.

The family of Richard "Dick" Holmes created this Life Tributes page to make it easy to share your memories.

Send flowers to the Holmes family.